Home » Featured » 7 Last-Minute Gifts To Give PCS’ing Families
Featured
You’ve purged, donated, sold or (let’s admit) just trashed some things. You wonder how on earth you’ve accumulated so much stuff at your current duty station and you don’t plan on taking it all with you. 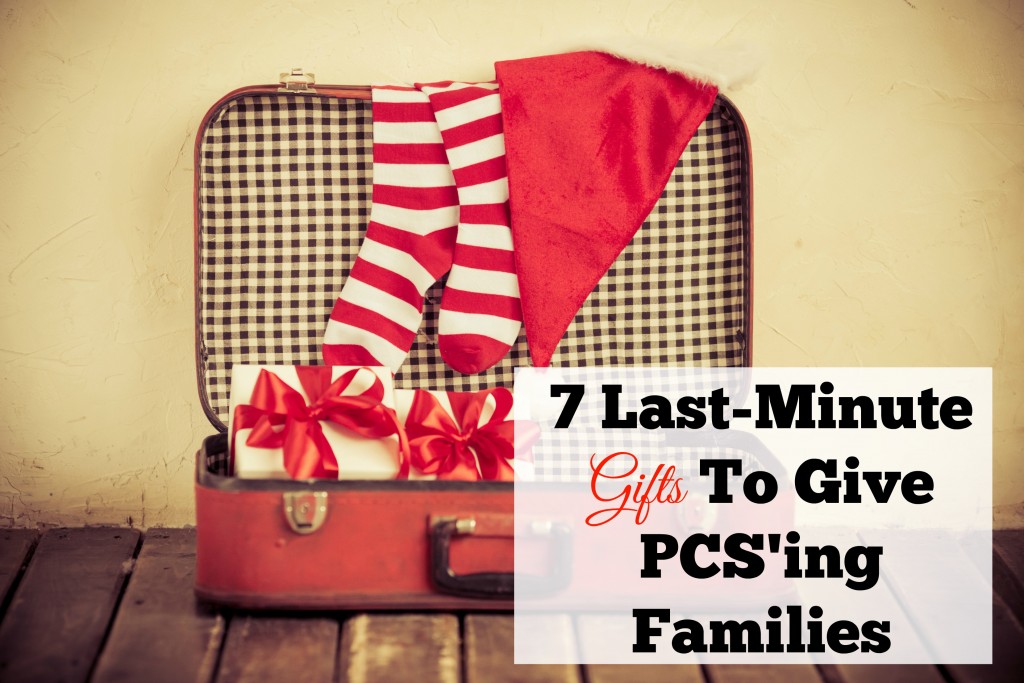 But — uh oh — it’s the holiday season.
You have family and friends who want to give you gifts. In fact, they insist on giving you gifts. While they feel the spirit of giving, all you can picture is an influx of boxes of things you’ll have to carry on the airplane or pack in your already-full car, as you travel to your next duty station.
Even if you’ve politely told them that you don’t need or want anything, odds are that they really want to give you something. If you are at a loss, here are a few quick, easy, useful, last-minute ideas that will allow them to give without weighing you down.

Even if you don’t always shop at the Commissary, it makes a convenient option when you first move on base. Let’s face it, setting up that kitchen for the first time isn’t cheap. They can be purchased online here.

Much like the Commissary, most moves start with a least one (or ten) trips to the Exchange. What’s great about this gift card is the option for electronic delivery, if you don’t yet know your new address. They can be purchased online here.

If you will be stationed CONUS, you can benefit from two-day shipping. Just imagine the purchases you can make from the comfort of your own home (which is great if you don’t have your POV yet). Additionally, the package offers video, music and photo storage. Learn more .

Are you moving somewhere with a great zoo, aquarium, museum or theme parks? Suggest day passes or a membership and have something to look forward to in your new home town.

This is a great idea for children once a new address is established. It’s the gift that keeps giving all year, and helps establish consistency. Check out favorites like Ranger Rick Jr. or Highlights

Sometimes the last thing you want to do is move, immediately grocery shop and cook. There is nothing like a night out with family or a romantic dinner for two to give you a much needed break. Here are some ideas.

When all else fails, let’s face it — moving isn’t cheap and neither are the holidays. Sometimes the most appreciated gift is money that you can spend how you need it. PayPal is quick, easy and electronic. Learn about it here.

So there you have it. A guide to quick, convenient and lightweight gifts that can follow you anywhere. Happy holidays!

A self-described “Jackie of All Trades,” Army wife Jackie Toops is a mother of two and enjoys writing, travel, art, languages, slow cooking and peaceful parenting. She studied Interdisciplinary Humanities, Museum Studies and Nonprofit Management, and has overseen public relations for museums, galleries and universities. She is a contributing author for Wall Street International Magazine and has discussed her articles on-air with AFN Wiesbaden. She’s usually seen adventuring with her Canon, a coffee and two small children. Follow her onTwitter.

Krystel is the mom of two and an Army Wife. In addition to Army Wife 101 she is the Co-Founder of SoFluential.com a digital media agency that connects brands with the military market. She has appeared on MSNBC ,FOX LA and formerly was a weekly contributor to HLN's "Raising America". She has written for various outlets including Sheknows and Lifetime and is a big fan of cupcakes and french fries.
December 21, 2015 by Army Wife 101 | 0 comments