Harry Potter is amazing simply put! The series of stories that follow Harry and his friends at the Hogwarts School of Wizardry have made fans of adults and children alike.

And if you’re a Fort Bragger here in North Carolina, you won’t have to go far to get your wizardry fix on this weekend. Fayetteville residents and those from surrounding areas can put those leftover Harry Potter Halloween costumes to use at this weekend’s family friendly “Magical World of Wizardry” event designed to show locals the beauty of the “Cool Springs Downtown District” with many planned events that will  bring local military fans together who enjoy books and movies like Harry Potter, Fantastic Beast and more!

Oh and we can go on without mentioning that the whole idea for this event is from Army Wife Kia Young of TheSocialCrown.com .

Bet your friends can’t say Fayetteville is boring now because there’s tons to do! 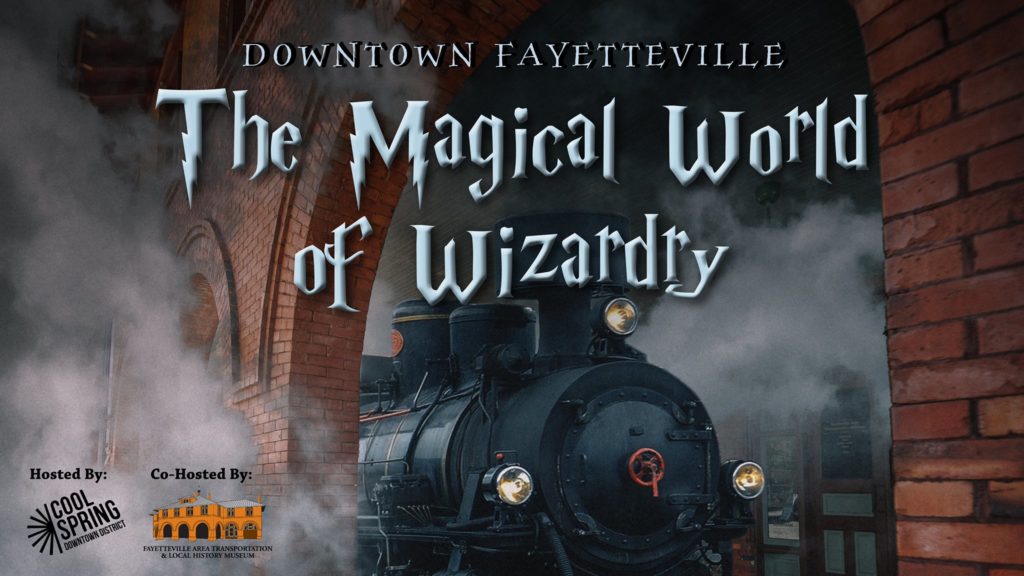 The Magical World of Wizardry:

When: November 16 & 17th, 2018 5pm – 9pm 0n Friday and on Saturday 11-6pm
Where: Starting Point is the Fayetteville Transportation Museum (325 Franklin St.) where attendees will get their MWoW Admissions packet— that includes maps (until supplies run out), Activity Coins to enjoy the Jelly Bean Tasting, Butter Beer Tasting, and Ticket to a Sorting Hat Ceremony (they’ll need to pay close attention to and adhere to their allotted time slot.)

1. The Photo Opportunities: Transportation Museum is Platform 9 3/4, Arts Council is Fayetteville Hogwart’s, The Forbidden Forest on Anderson St., Have You Seen This Wizard at A Bit of Carolina,, Harry Potter’s Room under the stairs at Euphoria Salon and more.

2. The Horcrux Hunt (explained in FAQ’s)

3. Butter Beer Tasting: 4 Restaurants (Volta Space, Rude Awakening, Huske Hardware and Lake Gaston) will have their own versions of butter beer to taste and score

4. Cookie Decorating Contest: The Sweet Palette will be hosting a paid Harry Potter themed cookie decorating class. Will be a fee and registration, stay tuned for details.

5. Classes: Herbology, Potions and Charms: The Hemp Pharmacy is hosting a Herbology Class. Turner Lane, which is serving as a sponsor for the event will be hosting Herbology and Charms Class. The Wine Cafe will have an Adults Only Potions class that is a mini version of their Wine Tasting (fee associated with Wine Cafe only)

6. The Music: The Score from the films will be heard throughout downtown from the Transportation Museum and the MarketHouse, so you’ll feel transported to that world. There will also be an official Spotify Playlist that will be released soon!

7. Sorting Hat Ceremony: During your allotted time on your ticket, report to the Great Hall to be sorted into your house. While supplies last, you’ll also get to embellish your own bespoke wand

9. Costume Contest: It will be so fun to see everyone from young to old dressed as their favorite character or in their house colors

10. JellyBean Tasting: Will it be yummy or gross? Exchange one of your galleons to taste a mystery Bertie Bott’s JellyBean!

*Important to note this event is in no way associated with JK Rowling, Harry Potter or Warner Brothers and that no official Potter merchandise will be for sale.

Where do we go when we come Downtown?

The starting place is The Fayetteville Area Transportation and Local History Museum located at 325 Franklin St. You’ll want to come here FIRST to get your Map, Sorting Hat Ceremony Tickets, and other gold coins that give you admission to special activities, like the Jelly Bean and Butter Beer tastings.

How much does it cost to get in?
Admission is free, however there may be a few events that have a cost associated, like our Cookie Decorating class at Sweet Palette (more information to come) and our Adult Only Potions class at The Wine Cafe! Other things you may want to bring cash for include our “Fayagon Alley” Market, Food Trucks, Food Carts and more. There will be shopping opportunities throughout the CSDD that weekend.

Is this event for Adults or Children?
We welcome all aged Wizards, Muggles and Magical Creatures! There will be something for everyone.

How will the Horcrux Hunt Work?
Several stores throughout Downtown will have a riddle for you to decipher! Guess correctly and you’ll receive 1 of 7 Horcruxes. However, it’s possible that more than one participating merchant will have a specific horcrux, so be strategic!
Once you’ve collected all 7 Horcruxes, you’ll turn them in at a TBA location and be entered for the Grand Prize!

Should we dress up?

There will be a Costume Contest, with an Adult (19+), Teen (13 – 18) and Youth (12 and under) categories. There will also be several photo opportunities, so dressing up is encouraged.

Where will the Sorting Hat Ceremony take place?

At Hogwarts, of course! The Arts Council, at 301 Hay St, will be transformed to the Great Hall at Hogwarts and Sorting Hat Ceremonies will be taking place several times throughout the event. Note that you MUST get a ticket with your ceremony time upon arriving, at the Transportation Museum.

Krystel is the mom of two and an Army Wife. In addition to Army Wife 101 she is the Co-Founder of SoFluential.com a digital media agency that connects brands with the military market. She has appeared on MSNBC ,FOX LA and formerly was a weekly contributor to HLN's "Raising America". She has written for various outlets including Sheknows and Lifetime and is a big fan of cupcakes and french fries.
November 16, 2018 by Army Wife 101 | 0 comments