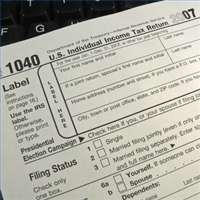 Many people have literally fell back in horror when they find out that I do my own taxes. For the past 4 years my former neighbor and close friend from Hunter and I have had a tradition of either going to each other’s houses and doing our taxes together on our laptops and once I moved across the Pacific via phone.

The truth is unless you have alot of investments, properties and all that jazz ,doing your taxes is not complicated.

Gone are the days of running to Jackson Hewitt or HR Block and paying $300 or more to have some person who simply took a course complete my taxes for me (no pun intended). Many times the tax preparer would move so fast we barely had any chance to totally review what was being input into the system except for our name and social security numbers. We then were stupid enough to get sucked into rapid refunds paying even more money just so we could get less money back faster.

Then a few years ago I saw that I could log on through Military One Source and use the free HR Block Software for the military at no cost. I logged on and literally within minutes I began my tax prep by myself for the first time while my my husband was deployed. I believe people think doing taxes is like what you see on tv, subtracting lines from lines and adding totals from another line and so on. In actuality the software is what I call “Stupid Proof”. You log on create an account and start off by entering names and dependents social security numbers. From there you enter the information exactly as is from your W-2 and the guide leads you. If you don’t understand something, there is a guide button for everything literally. Even the section for entering combat pay was easy. As you are going along you can see the money you either owe or are receiving back at the top, which makes it more entertaining to do it yourself. Furthermore it feels good to know that if I am getting a refund back that it’s all coming to me and I won’t be paying anyone to do it. The only part of my taxes I did pay $29.00 for was the state portion .

I realized doing it myself that it didn’t take any longer to get our money back , within a week we always had our refund back via direct deposit. Once the tax season begins a schedule will be released of what dates to expect your refund back , based on the dates you filed.

The software also saves your information from the year prior so that you don’t have to enter the next year. You receive ample  opportunities to review your tax return before submitting it and you also may save it should you need to come back to it.

To utilize the HR Block free software you must go through Military One Source …You can sign up and get all the details at: http://www.militaryonesource.com/MOS/FindInformation/Category/TaxFilingServices.aspx

Turbo Tax is another good free one for military, but I haven’t used them so I can’t share my opinions on it as of yet.

This years W-2 for active duty army comes out on January 24, 2011. For those new to this you can find the W-2 via your spouse’s Mypay account.

All other branches can view the W-2 release schedule at : http://www.dfas.mil/news/DFASRelease121001.pdf

Krystel is the mom of two and an Army Wife. In addition to Army Wife 101 she is the Co-Founder of SoFluential.com a digital media agency that connects brands with the military market. She has appeared on MSNBC ,FOX LA and formerly was a weekly contributor to HLN's "Raising America". She has written for various outlets including Sheknows and Lifetime and is a big fan of cupcakes and french fries.
January 17, 2011 by Army Wife 101 | 10 Comments

10 Comments on Gasp! Yes I Do My Own Taxes