After the service member themselves going through a deployment, dealing with a loved one’s absence for a military spouse is hard to swallow. There are so many mixed emotions and things that always seem to happen when they aren’t around. Some of the things that happen are serious and make you cry, and then there are those where you just shake your head and laugh. 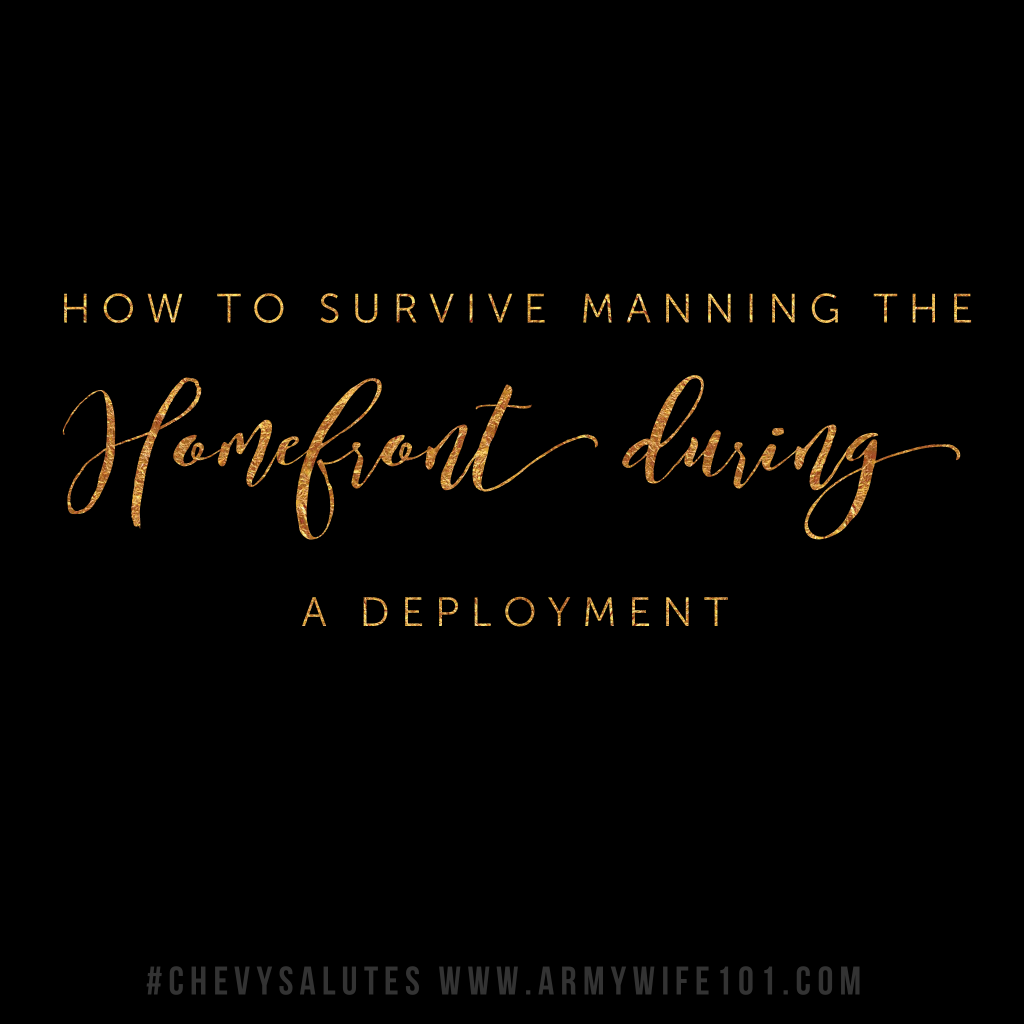 Some of the funnier ones include:

Despite all of the above, there are ways to make deployments easier and bearable until they return and the AW101 is sharing ways to help you man the homefront while they are gone.them below.

There’s no doubt about it that staying connected is key. If you can’t video chat then email. If you can’t email then write a letter and send it through the mail. No matter your choice of how to keep in touch…keep the lines of communication open.

I know that sending care packages is actually for the service member, but it can be fun for you too. I found joy in not just sending big care packages, but even small envelopes with personal letters, magazines and just cool little knick knacks. It gave me something to do like looking for cool things to put in the next package.

Know that there will be times they may not be able to call. Also know that this doesn’t mean that there is something wrong. Even in 2016 communication in the middle of nowhere can still be glitchy. If you know this ahead of time it will be easier to keep calm if and when they can’t call daily.

Friends How Many Of Us Have Them?

Yes, how many friends do you have? If you don’t have one find one because they are the part of the secret sauce that is essential to dealing with a deployment. It never hurts to have someone you can call on in an emergency or when you just need to talk.

No like seriously we mean it ” Get A Hobby”! If you work great! If you don’t create a Pinterest board with several projects to try out, taking a class on base, volunteer while the kids are school, but most importantly stay busy. You will be surprised how quickly time passes when you have other things to focus on.

Take Your Chevy To The Levy

Okay don’t necessarily do that but be sure to keep your car up. The first deployment I went through with my spouse I had a Chevy SUV. Some of the easy maintenance I did to keep it in good shape included keeping at least a half tank of gas at all times, getting the oil changed every so many months, and making sure the air pressure in my tires were at the proper levels. Why is this important during a deployment? Because having your car breakdown and having to rely on others to get around is not ideal when your spouse is away.

In fact before a deployment begins is a great time to evaluate your car situation which is why I am glad to have partnered up with Chevrolet to share these deployment survival tips and also about the Chevrolet Military Purchase Program. Through May 31st Active Duty Military Personnel, Retirees and Veterans can take advantage of a great military discount that can be combined with other offers that Chevrolet has going on. When doing shopping I love to purchase from brands that I have used before and also that support the military and Chevrolet definitely does that. In addition to being the official vehicle of the Army Navy Game, supporting the Achilles Freedom Team of Wounded Veterans and Cell Phones for Soldiers; Chevrolet also employs nearly 5000 Veterans and has over 45,000 retirees who have served in the military.

Whether its before or after the deployment where you might need a bigger vehicle (hint hint) then you have plenty of options.

Learn more about the Chevrolet Military Purchase Program and all their great initiatives with the military HERE.

Want to talk more about surviving deployment and win some cool prizes? Join me on Tuesday May 31st at 830 PM EST for a live Facebook Chat on the Army Wife 101 FB Page sponsored by #ChevySalutes.

This is a sponsored story from Chevrolet and SoFluential | MSB New Media.

For shares that include a brand URL, please include the #ad hashtag in your social share.

Krystel is the mom of two and an Army Wife. In addition to Army Wife 101 she is the Co-Founder of SoFluential.com a digital media agency that connects brands with the military market. She has appeared on MSNBC ,FOX LA and formerly was a weekly contributor to HLN's "Raising America". She has written for various outlets including Sheknows and Lifetime and is a big fan of cupcakes and french fries.
May 29, 2016 by Army Wife 101 | 0 comments