“In little towns like mine, that’s all they’ve got
Newspaper clippings fill the coffee shops
The old men will always think they know it all
Young girls will dream about the boys of fall”

Kenny Chesney “The Boys of Fall” 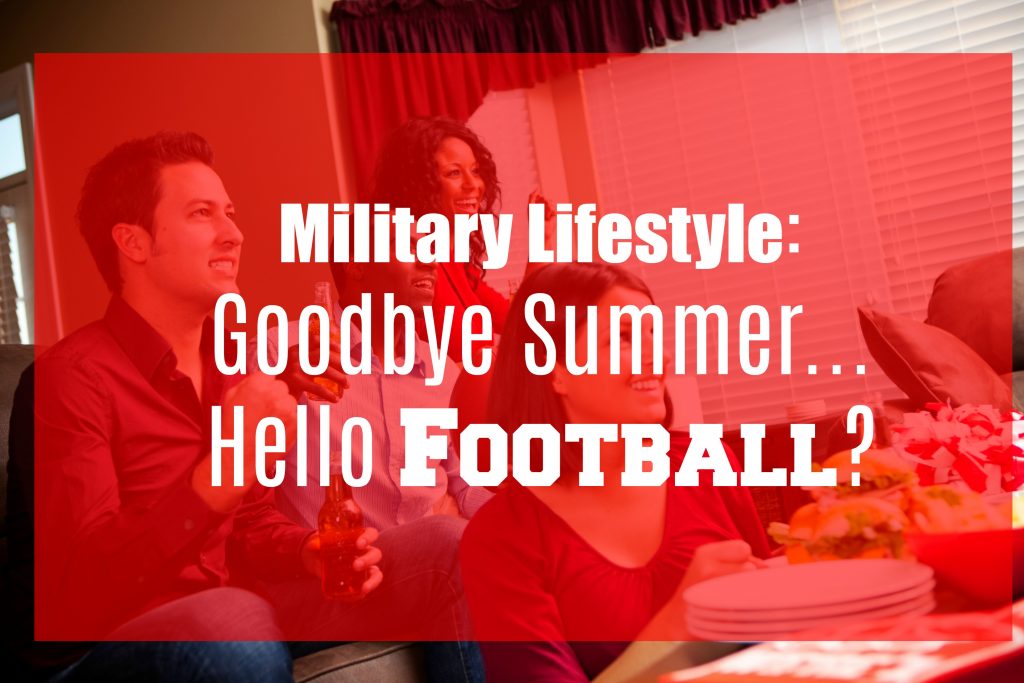 More than just for the pumpkin spice lattes, the crisp chill that begins to settle in the air, or the underlying excitement of the fast approaching holidays, fall to me will always be the herald that makes way for my favorite season of all: Football Season. Yes you heard me correctly, my favorite season is Football. But wait, it wasn’t always this way!
While I always enjoyed football; from watching my hometown high school team on Friday nights, to developing a love for the University of Michigan Wolverines (Go Blue!), it was more of a pastime thing; such as a party friends were going to or if I was sitting at a restaurant and it happened to be on. I never knew how much football would come to mean to me though until I became a military spouse.
Moving from place to place can be unsettling for a new spouse, so anything that can remind you of home becomes even more special to you. Watching my favorite team reminded me of everything I missed about home. Seeing my friends and family post about plays or share their pictures while we watched it at the same time made the distance seem not so far. Meeting a fellow fan at a new duty station has the same effect. One minute you’re awkwardly introducing yourself at a spouses event and the next minute you’re excitedly discussing past games or the upcoming season.
Football has kept me close to my husband even when we are so far apart. I always tell people that I’m a college football girl at heart and an NFL fan by marriage. By this I mean that when we got married I hadn’t really settled on a favorite NFL team, although by default I guess it would be the Detroit Lions. This worked out perfectly because my husband is a die-hard Bronco’s fan. Peyton Manning took the Bronco’s to the Super Bowl for the 1st time while he was in Ranger School, I stayed up to watch the game by myself because I knew he wasn’t able to. The subsequent loss was a hard one and I was heartbroken to write him that his team had lost. Two years later when they went back to the Super Bowl and won we were again apart, but this time we were able to share the experience through texts and phone calls.
I have even more memories of football gapping the distance between us over the years. Times where he’s been deployed and stayed up just to be able to watch a Michigan or Bronco game at the same time as me. Sometimes the long days of deployments or separations can bring a lull in conversation. It has nothing to do with how much you want to talk or how much you miss each other- just that there can sometimes be a redundant feeling to the conversations when your routine doesn’t change much. There is no redundancy in football though. Each play is exciting, each game unique and different. Much like military life, right? No two stories are the same, no two experiences quite like the other. There’s ups and there’s downs, triumphs and tragedies.
If you’re a football fan, you’ll probably understand what i’m talking about. If you aren’t, maybe you don’t get the allure of the game- but you can understand the depth of emotion it can create. Or perhaps you’ll look at your hometown team (or the closest to it) in a new light. Sometimes as military spouses, we struggle to make connections, either to the homes we’ve left behind or to the new homes we create as we travel from place to place. In more ways that one football can help to create those new connections and also maintain the old ones.
It’s Football Season ya’ll! So let’s hear it for the boys of fall.

About the Author: Lauren Gardner is a military spouse and stay at home mom of four amazing children. When she is not playing Uber driver to soccer practice, football, or school functions she is volunteering with her local PTA and organizing activities for local military spouses in her area. In her free time she enjoys reading, writing, working out and playing with her fur-babies. She is also a notorious StarBucks addict and has a secret addiction to leggings, fuzzy slippers and Hallmark movies.
September 26, 2017 by Lauren Gardner | 0 comments