Home » Military Life » Onpost Living » Milspouse Confessions: We Married in Secret
Onpost Living
Prev1 of 2Next
Scroll To Top Or Bottom To Go To Next Page 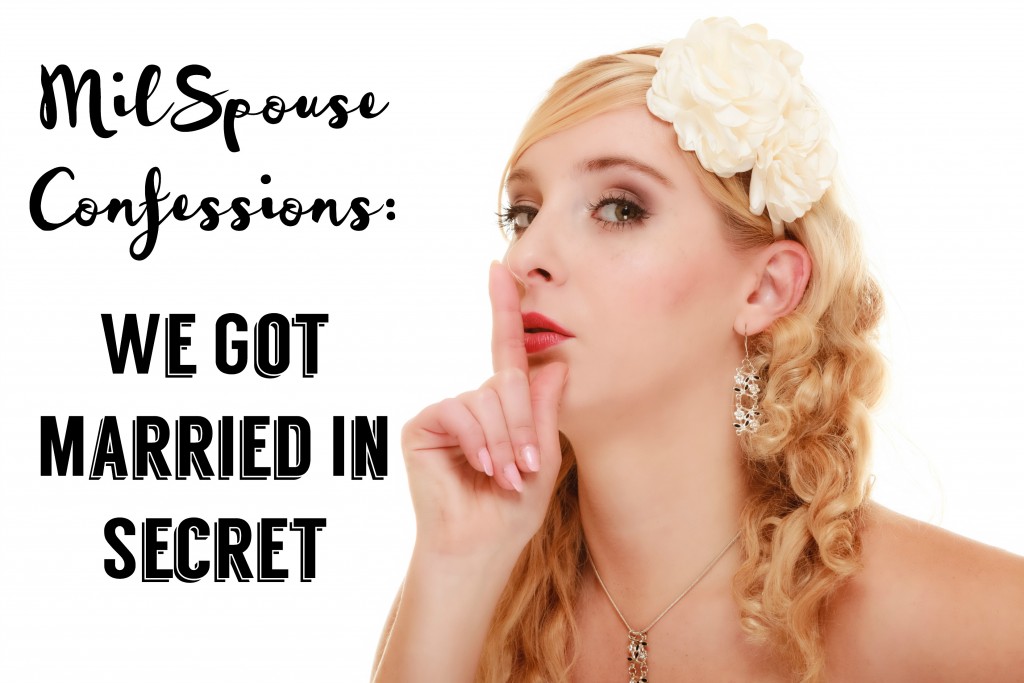 The idea of eloping is quite romantic, yet for military couples, it’s sometimes a necessity. Brides and grooms rush to the altar because this lifestyle doesn’t always allow for long courtships or the planning of dream weddings.

I spoke with three women who secretly said “I do” to be with the man they loved. For privacy and to uphold their secret, their names have been changed. I thank them all for sharing their stories with me in hopes that other “secret” brides will relate.

Emily and Daniel met through mutual friends while serving as soldiers and NCOs in the Army. She was instantly attracted to his professionalism, manners and sense of humor. Daniel loved that she would speak her mind and challenge him with friendly arguments and banter.

In order to be stationed together, they needed to marry so that their orders would align. Unfortunately their parents were experiencing financial stress, so the couple chose not to burden them with wedding expenses. Instead, Emily and Daniel opted for a secret civil ceremony and saved money for a small wedding later on.

The two 26-year-olds kept their nuptials secret for just a few days. “In a phone conversation after our civil ceremony, my husband accidentally referred to me as his wife,” explains Emily. “He panicked and tried to cover it up, which only made things worse.” The newlyweds came clean, and inadvertently hurt feelings, especially those of Emily’s parents. “I wish they understood how much I wanted them to share in our special day,” she says.

The bride and groom planned a small military wedding and reception at the post chapel. Unfortunately, the events of September 11, 2001 forced the couple to call off the celebration. “All of our military guests were involved in post- 9/11 missions, including us,” recalls Emily. Although crushed that she didn’t get her “real” ceremony, current events put things into perspective. “The most important thing in the world was being married to each other — and we were, despite the fancy ceremony,” explains Emily.

In hindsight, the couple regrets not taking a single photo at their civil ceremony. “We were saving them for the ‘big day’ and we ended up missing out on capturing our moment.” Maintaining positivity Emily jokes, “At least we didn’t go into thousands of dollars in debt and I’ll never have to run into a burning building to save my wedding album.”

For couples planning a civil ceremony, Emily advises, “Make sure that it is about the two of you and your commitment to each other. And for heaven’s sake, bring a camera!”

Today Emily and Daniel have been happily married for 15 years. They have endured nearly two decades of deployments, hardships, sacrifices and personal losses. “I think it shows that we renew our vows every day to each other,” shares Emily.

Although they never had their big ceremony, Emily believes, “What we have is so much bigger and so much stronger than a single day. We have the most important thing in the world — our marriage.”

Although they were friends since their sophomore year of high school, Susanne and Andrew began dating after running into each other on his 21st birthday. “After that it was a whirlwind romance. We spent everyday together until he left for BCT, and we wrote letters every day while he was gone,” recalls Susanne. Andrew had the opportunity to return home for Christmas and proposed to Susanne with his great grandmother’s wedding ring.

Shortly thereafter, Andrew returned to their home state for AIT and Susanne regularly made the eight hour drive to visit him. Naturally, Andrew wanted Susanne to follow him to his next duty station, so the 21-year-olds needed to tie the knot quickly. “One of the times I visited, we got married by our friend and ordained minister in a park by the lake. We remember the day we got married was very simple, peaceful and happy,” shares Susanne.

Within that same year, Andrew and Susanne planned a big wedding to celebrate with family and friends. At that time, the only people who knew they had already married were the minister, Susanne’s dad, and a friend who witnessed their nuptials. They kept their private ceremony a secret to spare the feelings of friends and family who wanted to celebrate with them. “While it was nice having loved ones celebrating with us,” explains Susanne, “it was also much more chaotic and a lot more work.”

One of the more stressful aspects was that the groom had a conflict with the original wedding date. Andrew was not granted permission to leave the base that weekend and they had to move the wedding to a different day. Unfortunately, it meant that many of their family members couldn’t attend afterall. When asked if they would do it again, Susanne shares that they would probably just skip the wedding celebration. “That was more about making other people happy than it was about us,” she says.

For those planning a civil ceremony and a formal wedding, Susanne recommends, “Try not to keep it a secret for too long. The longer you wait to tell people, the harder it is. I know because I am still working up the courage to tell some people.” To this day, Susanne’s own sister doesn’t know about her secret vows.

Today Andrew and Susanne have been married for four years. They fondly look back on their secret wedding day and describe it as “perfect.” That is the date they celebrate as their anniversary each year.

It was love at first sight when Katie and Patrick met at a house party while stationed overseas. He was a soldier, she was a civilian employee, and the two connected right away. “We knew early on we wanted to be together for life,” shares Katie.

Patrick extended his tour twice, yet eventually he received orders back to the States. “We knew that in order for us to be in the same place and give our relationship a good shot at making it, we decided to get legally married nine months before our wedding.” The engaged couple had already set a date for the following spring and decided to officially tie the knot during a wedding planning trip in the summer.

Katie confided in her closest friends, her boss and coworkers. She describes, “All of them, especially those in the military, some of whom had been secretly married themselves, were supportive.”

Patrick and Katie also shared the decision with their parents, yet insisted that they not attend the civil ceremony. Katie explains, “We wanted to save all the emotion and “big surprise” for our actual wedding.”

The two were quickly married at a courthouse. “I’m glad we didn’t invite anyone; it’s a special, funny experience that only he and I share.” Their officiant, a Scottish woman, snapped their picture after the 20-second exchange of vows. “We both look so shellshocked and awkward; it’s hilarious. The whole thing was just absurd.”

Katie worried that their secret vows would take away from the big wedding, but feels that it actually alleviated some pressure, since the important part is done. She explains, “If anything, it put more emphasis on our ‘real’ wedding ceremony to be all the more special since we didn’t get any say in the other one. Our first wedding was for the Army; this one is just for us.”

For others in a similar situation, Katie recommends reading the regulations and talking to legal early. “We misunderstood the legalities of getting married overseas and how that impacts sponsorship. Luckily it all worked out in the end, but we could have saved ourselves a lot of headaches.”

She also cautions that if family and friends will be upset that you marry without them, don’t tell them. “You have to do what’s right for you, and subscribing to this military lifestyle means that sometimes you have to do things a little unconventionally. Our parents were sad that they couldn’t be there to see us get married, but overall they are just happy that we found each other.”

In a few months, Katie and Patrick will have their big wedding complete with 170 guests. “It’s been tough keeping it a secret,” shares Katie, “sometimes I slip up and call him my husband instead of fiancé.” When their wedding day arrives, they will have been secretly married for about nine months.

More than A Day

Weddings are beautiful, joyous occasions worthy of celebration, even if it’s just a party of two. Revel in the moment and take the time to make it feel special, even if you are quickly eloping to get military paperwork underway. It’s page one of an incredible journey together, no matter how you seal the deal.

Krystel is the mom of two and an Army Wife. In addition to Army Wife 101 she is the Co-Founder of SoFluential.com a digital media agency that connects brands with the military market. She has appeared on MSNBC ,FOX LA and formerly was a weekly contributor to HLN's "Raising America". She has written for various outlets including Sheknows and Lifetime and is a big fan of cupcakes and french fries.
February 15, 2016 by Army Wife 101 | 1 Comment