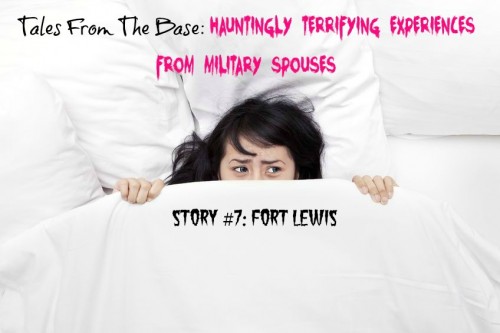 So, my mom was a German married to a soldier and he was an abusive drunk threatening to send her back to Germany and not take me with her all the time if she didn’t do what he said.  She decided that she would go to college at the Community College in Tacoma. There were always strange things happening in our house such as lights turning on and off by themselves, hearing voices, shadows and footsteps.  Our cat Fluffy, would stare off into corners and do that freaky cat growl at what looked to be nothing, so my dad just said she was an idiot cat.
My mom was taking Psychology and told her professor about the things that were happening in the house and he asked if he could hypnotize her and she agreed.  When she was under, she saw things in our house:  Native Americans, and other strange things.  She woke from that her trance and the professor was really interested and wanted to have another session another day.
Things in the house from that point kept getting more active.  I was always terrified of the hallway, the bathroom and what not.  The footsteps would get louder and when my mom was at night school, my father left me (nine years old at the time) alone at home so he could go to the bar and drink.  I kept thinking there was something in the doorways watching me or standing over me…like a witch or in the closets kind of like the boogey man.

My mom had no idea I was being left alone because my dad told me not to say anything to her or I would get into a lot of trouble, so I didn’t say anything to her.  I was watching TV one night while I was alone on the couch, with all the lights on and Fluffy sitting next to me and she started growling and hissing.  The lights started flickering and the TV was doing that snowy thing.  I got scared and started crying and ran to my neighbor who kept me at her house for the night.  My dad had no idea even when he returned in the middle of the night that I was not in my room.
My neighbor told my mom what had happened and she freaked out but thinking my dad would have her deported, she didn’t say anything to him.  She wanted to finish her nursing degree so she could take me and leave him.  She told her professor what had happened and he put her under hypnosis again and my mom was seeing what she thought were hooded monks in the house.  They never raised their heads, just kept it down the entire time.  She was seeing dead people in the house.  And of course, when she woke up from the trance, the professor was really interested and wanted to put her under a trance again some other time.  My mom wanted to stop because it was scaring her.

One night, after I went to bed, my mom was on the couch watching TV and she fell into a trance on her own.  The living room had turned into a dark lake and she saw a hooded monk on a paddle boat facing away from her.  She called out to it asking who it was.  It stood up, still facing away from her.  She told it to turn around and it did.  She then told it to take off the hood and when it did, she said she saw the most evil, demonic being and she started screaming.  I could hear her screaming because it woke me up.  She then said, while in the trance and I heard this, “Lord Jesus!  Help me!”  And then she woke up.  I went running out to the living room and she was in a cold sweat.  Years later she told me all of this and said that when she said that, a hand came out and pulled her out of there.  A year after all of that, that professor was stricken with cancer and died.
I told her that I thought I was just being a crazy kid with an over imagination.  Things in all of the houses that we lived in with my father always had weird things happening in them.  Until she divorced him in 1995, things were always weird where we lived.  Scary weird.  I checked on google Earth to see if that house is still there and it is.  Still looks the same.  I still have nightmares about that house, but it’s always empty, dark and haunted.  It’s like I am seeing it for myself now.
Submitted By: Caterina W.

Krystel is the mom of two and an Army Wife. In addition to Army Wife 101 she is the Co-Founder of SoFluential.com a digital media agency that connects brands with the military market. She has appeared on MSNBC ,FOX LA and formerly was a weekly contributor to HLN's "Raising America". She has written for various outlets including Sheknows and Lifetime and is a big fan of cupcakes and french fries.
October 31, 2014 by Army Wife 101 | 0 comments