Compensation for this post was provided by Baskin Robbins via MSB New Media. All opinions expressed in this piece are my own.

When my family and I were stationed at Schofield Barracks, Hawaii some years back we made a habit out of getting ice cream on Friday nights. Our favorite place to get it was Baskin Robbins because they have my favorite flavor which is Pistachio Almond, and also because they were close by in the PX’s food court right on post. Because of that you can only imagine why I am excited to share the awesome promotion they are doing this Veteran’s Day in support of “The USO”. This upcoming November 11th for every scoop sold at any Baskin Robbins (U.S. locations) 10¢ from every scoop will go to the USO.

If you’re not familiar with the The USO then you should know they are a non profit organization that helps to keep up the spirits of America’s military personnel. The USO is famous for supplying awesome free entertainment to the military whether it is overseas or in the states. Most of those cool concerts that you see happening at military bases are thanks in part to organizations like the USO. Another awesome free service that the USO provides are waiting rooms in many airports around the world and nationwide. I have had the displeasure of being laid over in an airport for more then a few hours and the USO turned an annoying experience into a great one. They provide comfortable sitting areas, snacks, kids playrooms, and sometimes even a place to shower.

This is why taking the whole family out for a treat (whether you are military or not) should be an easy choice. This organization does so much for the military and through initiatives like this they can continue to uplift the morale of our troops and provide services to support to us.

How Do I Help

On November 11th simply walk into any Baskin Robbins and order your favorite flavor and just remember for every scoop you order 10¢ will go to the USO. Use this as an excuse to eat as much ice cream as you want. 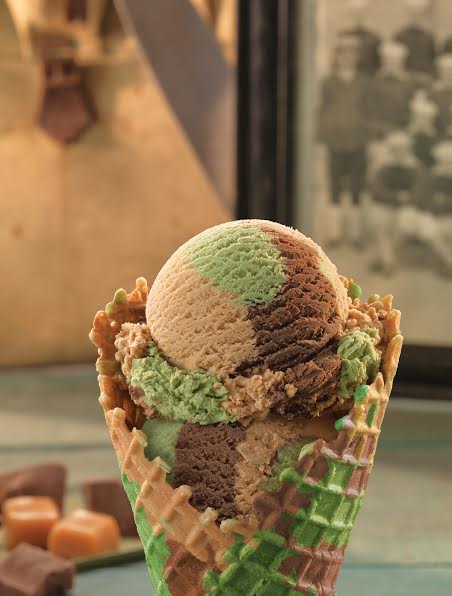 Speaking of flavors everyone knows Baskin Robbins is home of the 31 flavors and to celebrate our Veteran’s , throughout the month of November you can try out their special military themed flavor: First Class Camouflage . This flavor is a combination of chocolate, Salty Caramel, and cake flavored ice cream. Additionally they will also have camo colored waffle bowls that are green, tan and brown. “Guests can also enjoy Baskin-Robbins’ First Class Camouflage Layered Sundae, which is made up of OREO® cookie pieces, caramel praline topping, hot fudge and topped off with whipped cream.”

Lastly Baskin Robbins has a history of supporting the troops through the USO and through other initiatives. For Veteran’s seeking entrepreneurial opportunities BR launched a Veteran’s Incentive program for Vets who wish to open a Baskin Robbin franchise. “As part of the program, the company waives the initial franchise fee of $25,000 for developing a new Baskin­ Robbins location in select markets for qualified, honorably discharged U.S. veterans, making it easier for them to start their own business”.

Krystel is the mom of two and an Army Wife. In addition to Army Wife 101 she is the Co-Founder of SoFluential.com a digital media agency that connects brands with the military market. She has appeared on MSNBC ,FOX LA and formerly was a weekly contributor to HLN's "Raising America". She has written for various outlets including Sheknows and Lifetime and is a big fan of cupcakes and french fries.
November 4, 2014 by Army Wife 101 | 0 comments