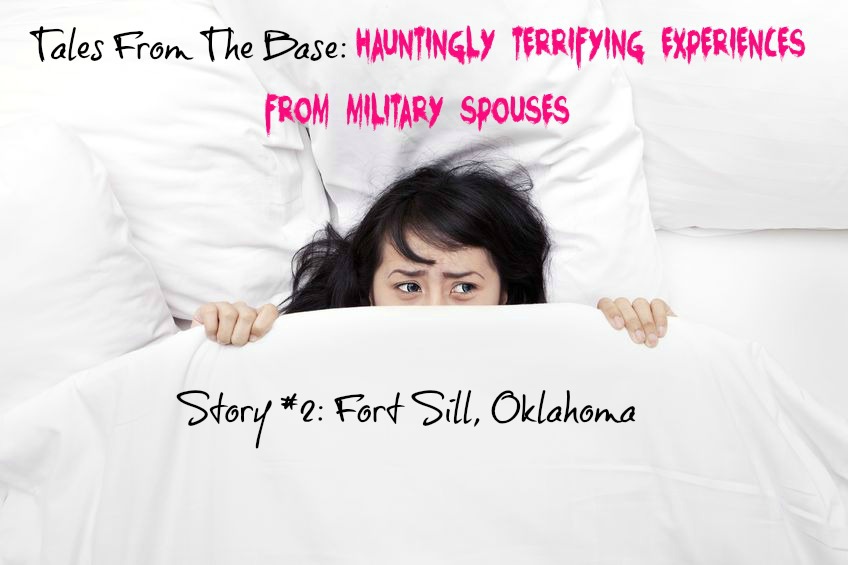 My name is Brittani and I live on Fort Sill, OK in post housing. Ever since the day we moved in this house we have had a ghost or two. The activity has escalated extremely since my husband went overseas in July.

The DAY we moved in the house my husband was on a previous deployment. My mom & I were making my bed & all of the sudden we saw what looked like a cat’s footprints walking on the bed & then lay down. We would feel a cat run up against our legs. At night you could hear it purring in the bed. It didn’t bother me cause it was just a “ghost cat”. After talking to our neighbors one night we found out that the family that lived here previously had a mentally unstable daughter who fed their cat bleach & it died. So hence the “cat ghost”. He was friendly so I didn’t mind.

But Then It Got Worse

Upon my husband leaving this last time something more “sinister” showed up. One night I awoke from sleeping and heard my daughter (who was 20 months at the time) screaming like she was in pain. I have a baby monitor with video so I looked at it fast and saw the shadow of a MAN next to her crib. I called the MP’s and ran in there with a bat. There was nothing there & my daughter was fast asleep. The mp’s checked out my house and there was no one inside and no signs of someone trying to get in. When I went to lay back down in bed I looked at the monitor. It had frozen. You could see the shadow of the man backing away from the crib. I had blackout curtains in her room so there’s no light in there that anything could’ve reflected off of. The next morning my oldest who is five asked me “Did you see him mom?” . I then asked “who’s him?” She said “him, mom… the ghost man.” She was asleep the whole time the mp’s were here & couldn’t have known what I had saw.

I talked to my mom about the incident & she told me “I didn’t wanna scare you but a few nights before I went home I heard Lilly talking to someone at 4 am. I went to check on her & she was playing her new game (frozen chutes & ladders) with someone. I took the game from her & put it on the table & when I came back out of her room from putting her back to bed all the pieces were standing up. They were knocked down when I put it on the table.”

About a week after this happened I was going to bed. Well I had to use the bathroom and afterwards  I went to shut the bathroom door behind me. I laid down in bed & then I heard the door open. I turned the light on from my phone and sure enough the door was open. I closed it again, listened for the click & went back to my bed. Then I heard it open. I once again shut the door, listened for the click then turned around & it opened right away. I yelled “can you please just f*cking stop!!!!” And then the door shut in my face & I heard a little boys laugh. I don’t have a son that is living. So it definitely wasn’t my kids. The next morning my neighbor asked me if I had a rough night babysitting cause they could hear the little boy laughing at 12pm, 2 am & 4 am. I do NOT have a living male child. And I was NOT babysitting.

Then Kensi (my youngest) woke up with a huge bruise with 3 scratch marks on her spine a few nights after that.
Then a few days ago I was chased out of my house by something. I could hear its feet chasing me & when I made it to the living room it pushed me.

The Final Straw …I’m Out

Then not last night but the previous one was the icing on the cake. First my daughter was sitting at the coffee table eating dinner, she has a little lawn chair that she was sitting in. She wasn’t even moving when the chair slid out from under her then she hit her face on the table. This isn’t the first incident of her being pushed down by whatever is here. Then a couple of days ago I dropped some papers under my bed. Well the other day I was sitting on my bed talking to a friend & when I hung up I stood up & walked around to the foot of my bed. All of the sudden I heard something crawling out from under my bed, towards my feet. I saw the bed skirt flutter like something was coming out. I ran as fast as I could, grabbed my kids & put them in the car & waited till my best friend came over to check out my house.

I’m moving back home until my husband comes back because I’m terrified of my house.

Thanks for hearing me out.

Krystel is the mom of two and an Army Wife. In addition to Army Wife 101 she is the Co-Founder of SoFluential.com a digital media agency that connects brands with the military market. She has appeared on MSNBC ,FOX LA and formerly was a weekly contributor to HLN's "Raising America". She has written for various outlets including Sheknows and Lifetime and is a big fan of cupcakes and french fries.
October 17, 2014 by Army Wife 101 | 15 Comments

15 Comments on Tales From The Base: Hauntingly Creepy Experiences Military Spouses Have Had On Base: Story #2 Fort Sill