With Halloween just around the corner tales of hauntings and ghouls are always abound. And it’s no secret that some military bases hold a lot of history …some good and some horrifyingly bad.

Recently I asked military spouses to share their experiences of “not being alone” or seeing a ghost on base and shockingly I received lots of replies. Over the next few days I will be sharing those stories. 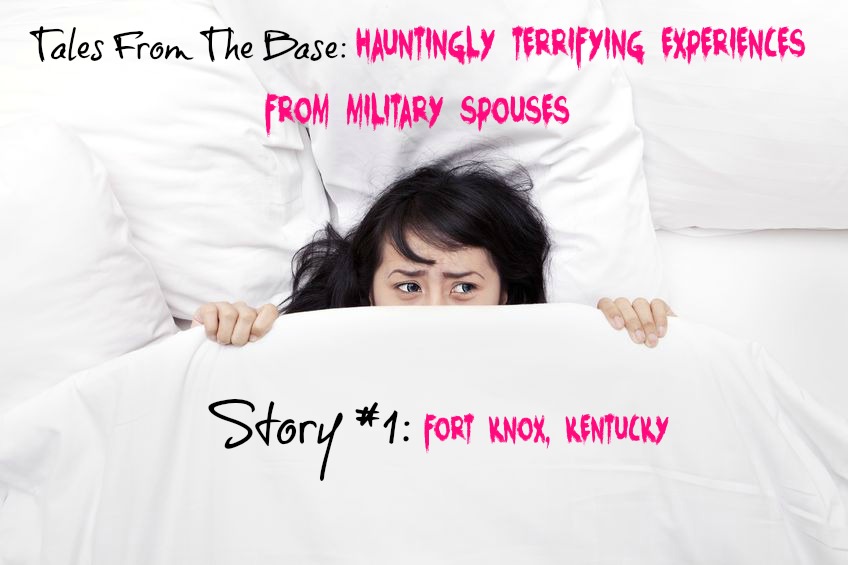 I lived in the older one level homes on Fort Knox on Gilkey Loop. When we moved in our animals didn’t like going down the hallway where the bedrooms and bathroom were. We had 2 small kids who also didn’t like being back there. When we first moved in I was sitting in the living room and heard what sounded like the silverware drawer opening and closing. It sounded like the silverware was being moved around in the drawer , but I hadn’t even unpacked the kitchen boxes yet.

Then the light bulbs started blowing out in the back hallway and bedrooms. We had housing come in and they said everything was fine but it didn’t matter what kind of bulbs we put in they would blow out within 24 hours.
One night we heard a huge bang coming from the living room area. We ran out there and saw my large shelf that was hanging on the wall was on the floor. This shelf had decor on the top of it but nothing was out of place. It was like someone lifted it up and than off of the screws, which were still in the wall. Even though we heard the big bang there was nothing out of place except this shelf was now sitting on the floor.
One night I was in the master bedroom and my husband was in the livingroom. He came in and asked me what I wanted and and I told him I hadn’t called him. He swore he heard me calling his name from the kitchen door in the dining room but I hadn’t been out of bed all evening.

This activity continued for a few months and then we started seeing shadows in the hallway. They were so dark they would block out the entire doorway to the room. I was so unsettled by the feeling in the master bedroom that I moved our two children into the same room and moved our master into the other bedroom across from the main bathroom and completely closed off the master bedroom. That was when the shadow activity started getting worse.

There were mornings, after my husband left for pt, that I would have my back to the door and felt like someone was standing there staring at me. I would practically be frozen in fear. The times I would have the nerve to roll over I would see the shadow cross the doorway.When this became too much to handle we completely closed off the bedroom hallway and started sleeping in the living room. Everyone was scared to even go to the bathroom once it got dark!

The final straw was one day when I went to the neighborhood center to get a new filter. When I got home my husband was standing outside. He said he was in the kitchen doing dishes and he thought I was standing behind him and whispered his name right in his ear. He said he turned around and no one was there. He said he looked outside and saw the car was gone so he knew it wasn’t me and he ran outside. That was when we begged the neighborhood center to let us move. They were remodeling our neighborhood and our loop was scheduled to be moved in two months. They said if we wanted to move now than we would be responsible to move our own things.
We moved three blocks away from that house. It took us a few days to move everything because I refused to go back into that house after dark. One night my husband said he left something he needed at the other house so he ran over there. When he got to the new house he was pale. I asked him what happened and he said there was something In the old house that wanted him out! He said he didn’t hear or see anything but the second he walked into the back hallway it was like it went completely dark and he never felt so scared in his life.

Submitted by Heather A.

Krystel is the mom of two and an Army Wife. In addition to Army Wife 101 she is the Co-Founder of SoFluential.com a digital media agency that connects brands with the military market. She has appeared on MSNBC ,FOX LA and formerly was a weekly contributor to HLN's "Raising America". She has written for various outlets including Sheknows and Lifetime and is a big fan of cupcakes and french fries.
October 16, 2014 by Army Wife 101 | 0 comments