When you move to a new duty station, Facebook groups are a wonderful resource. You ask about doctors, places to visit, local schools and more. What you might not expect is an active thread about ghostly, unexplained activity in your home.

For a group of Fort George G. Meade neighbors, this is exactly what recently transpired. The amount of creepy and unexplained stories happening in the beautiful Maryland homes is enough to make you wonder why housing doesn’t also provide sage with your keys upon move in.

Names have been changed to protect the living, rather… the innocent. 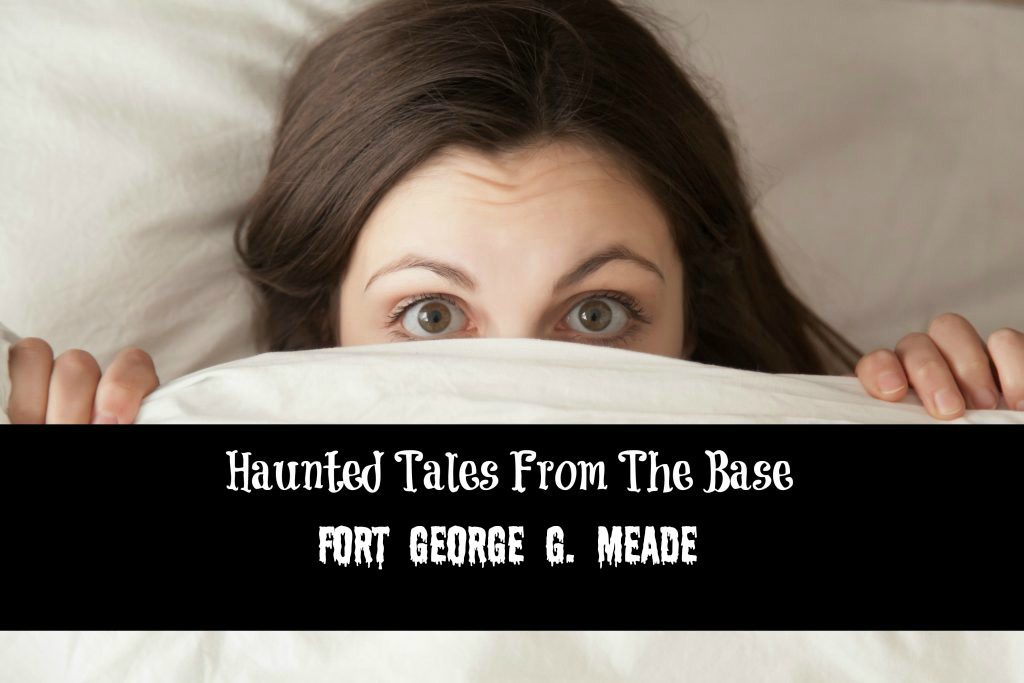 A Hotbed for Unexplained Activity

Fort Meade (originally Camp Meade) was named after Civil War hero, Maj. General George Gordon Meade. It was one of 16 cantonments built for WWI troops, overseeing the training of more than 400,000 soldiers. In WWII, Fort Meade served as a prison camp for German and Italian POWs, some of which are buried on post.

The raw emotion, the deaths of enemy soldiers, and the mysteries that have occurred here — to include an unexplained cemetery with the graves of 100 infants — prime Fort Meade for some serious negative and mysterious energy.

Has Anyone Else Noticed Anything?

Emily started a thread in a Fort Meade neighborhood group, linking to an article I wrote last year. She asked, “Hey so don’t laugh at me while you read this, but I’m wondering if anyone else has ever noticed anything. Last night I was woken up by a sensation of someone staring at me. When I looked, I saw a dark figure standing in the corner of the room by my dog’s cage. Out of fear I forced myself back to sleep. Not even a couple minutes later, I heard a loud crash. I jumped up to investigate and found that my two laundry baskets that were on top of my dog’s cage were dumped over on the floor. There is no way these baskets fell on their own because they were on an even surface, my dog sleeps under the bed, and the cage is locked overnight. I’m wondering if I’m the only one that has experienced something recently. Again please don’t laugh! I just think it’s weird.”

She Was Not Alone…

Carolyn chimed in. “OMG, our cabinets do the same thing. When we first moved into this house, I heard the doors downstairs and someone walking up and down the stairs at like 2 am. I called my husband to ask if it was him and he said no, he was still at Meuse cleaning the other house. You are not alone. Our cabinets like to open and close in the kitchen. Last night it sounded like someone was walking right outside my bedroom door, and my husband heard two people talking right outside the bathroom door in the kitchen one early morning. When we lived in Meuse Forest we would see shadows all the time.”

Amy added, “A few times now, my husband, two kids and I will be upstairs taking a nap and it sounds like someone has come into the house and is messing with stuff downstairs. BUT we keep the front and back door locked. It’s been so loud the past two times it’s woken me up. I always figured it’s just maintenance downstairs however we’ve never put in a work order. But again my a** is too scared to go downstairs alone and check it out.”

Carmen has had trouble sleeping recently due to the activity in her house. “The past three nights have been bad. Night one, I heard banging and had nightmares. Night two, I was hearing metal clanking and my animals were going nuts. Night three, the back of the toilet seat cover fell in that thing isn’t light. I have also heard loud bangs and one right outside my room door. My dog has been on alert and growling. Also, my Scentsy warmers keep surging and my brand-new regular light bulbs are blowing. Increasing nightmares and sleep paralysis over the past week. I don’t know why all this is happening now but it’s got me not sleeping and on edge.”

Tonya shared, “One night over the summer, I was packing for a trip and kept going back and forth between different rooms. I closed my oldest daughter’s bedroom door — and I mean closed it all the way — but when I turned to head to my own room, the door to my daughter’s room opened up. I stood there watching as it opened very slowly and then stopped. My daughter hates to sleep with the door closed, but I didn’t want to wake the, up so I tried to close it again. Sure enough, the door opened up. I even went in there to tell my daughter to stop, that I had shut it so that the light didn’t wake her. When I walked in, the girls were both asleep and I just stood there… I called my husband upstairs and had him check everything out, there is no way that door should have opened.”

Marie added, “Just the other night I was in our guest room with lights out, on my phone, and kept seeing something out of the corner of my eye in our dark hallway. It isn’t the first time the shadowy figure in my hall has appeared. I closed my door since its presence was bothering me and kept giving me slight jolts every time I’d see it. A few minutes after completely closing the door, it opened back up on its own. I just left it open and somehow managed to sleep. I have never felt that the shadow was a threat, it has more of a shy, curious presence. It always makes me think of a little boy.”

Stacy has also seen what she thought was a shadow of a child. “I’m not laughing at you,” she added. “When we lived in Potomac Place a few years ago, my husband had a sleeping bag thrown at him. This sleeping bag was sitting in a wagon right across from the stairs, and when it was thrown, it hit the gate we had going across the stairs and then fell to the floor. I also saw a shadow of what I think was a child run across the room.”

Shawna added, “I also have a shadowy figure I catch out of the corner of my eye in my hallway all the time. I have been telling my aunt about it for a few weeks now. She is part of a paranormal research group back home. I haven’t experienced anything more than that, but it happens all the time and seems to kind of dissipate when I look at it. My dog often barks into the dark hallway for no reason, even growls, which is out of character for her. Everyone in my house has been very moody and on edge since we moved in, and at first I just assumed it was due to just moving in. We have been here almost five months now and are settled and it’s not going away.”

Cassie messaged me privately with her story. She shared, “Last month when I was sleeping, I had sleep paralysis, way too often these days, and when my husband woke me up, I decided to check on my boys. My 3rd was sleeping on the floor in our room and the baby was in our bed, the other two in their rooms. I used the restroom, drank some water and went to bed. This was at 2:30 a.m. At 4:00 a.m. I, of course, woke up to the feeling of someone watching me sleep, then I heard walking. So I woke my husband and asked if he heard anything but he said ‘No.’ Literally five minutes later, we heard a female voice, clear as day on my side of the bed. It was just mumbling so we’re not sure what it said, but we both heard it. So glad I didn’t die of fear lol. I now tell Lucy, ‘Today is not the night and leave me the hell alone…I’m tired!’”

To read past stories from Fort George G. Meade in Maryland, please see Haunted Base Tales, Potomac Place, and The Helping Hand.

A self-described “Jackie of All Trades,” former Army wife Jackie Toops enjoys exploring the various facets of her personality by chronicling military life, world travels, family, her love of the arts and more. Her academic background is in the fields of Interdisciplinary Humanities, Museum Studies and Nonprofit Management, and she has overseen public relations for museums, galleries and universities. Jackie’s articles have been featured on Army Wife 101, Wall Street International Magazine, SoFluential, HomeAway, Military Biz Connection and FamiliesGo. While stationed in Germany, she regularly discussed her articles on-air with the Armed Forces Network in Wiesbaden. A mother of two, Jackie enjoys coffee, freelance writing, languages and discovering new ways to express herself. Follow her on Facebook and Twitter.
October 5, 2018 by Jackie Toops | 0 comments