Last year throughout the month of October we shared stories from military spouses base wide who had experienced hauntings or paranormal activity in their homes on post. You guys loved the series so much that we are back again with frightening REAL LIFE first hand encounters from fellow military spouses. 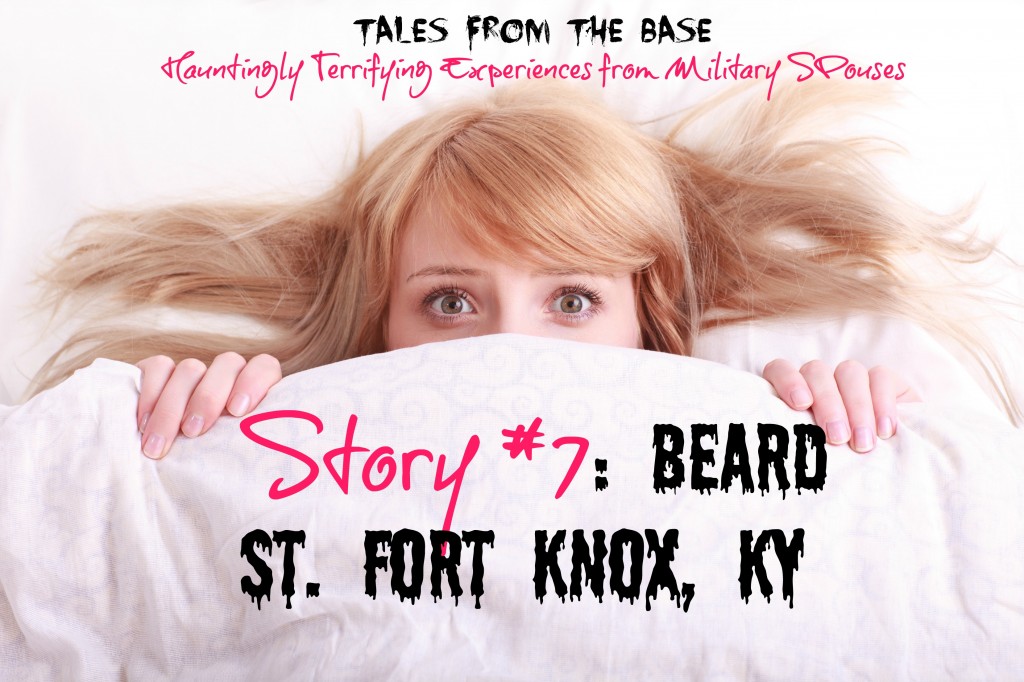 My family lived in the old single level homes on Beard Ave. The first experience was about four months after my family moved in. A dark shadow resembling a man would pace back and forth while I showered. It was as if he was waiting for me to finish so he could talk with me. When I noticed him, I would always pull the shower curtain open and he would disappear.

We believed this was the same man that would visit our youngest daughter when she took baths. She knew his name but my family cannot recall what it was. Our daughter told us he would frequently visit her and would ask questions, such as how was her day at school and did she like the meals I prepared for dinner, lunch, and breakfast?  Our daughter asked him where be was from and he said he lived in the woods in the back of our house. She also asked him how did he die and his response was he was shot while fighting in the WW1. We believed this same man also visited our oldest daughter as well.

Our oldest daughter woke up around 0315 am to use the restroom. When she opened her eyes, she was startled by a dark shadow bent over on the right side of her bed staring at her. She said she nearly peed in her pants when she saw him. She yelled at him to immediately leave her room in which he did. Our daughter never saw the black shadow ever again.

We believe after the same dark shadow was asked to never return to the room our oldest daughter slept in. He then decided to bother our middle and youngest daughters whom shared the same room, which was across from our oldest daughter’s bedroom. Our middle child never saw the dark figure, but our youngest child said that he would frequently visit her in the late evenings when everyone was asleep. Our daughters slept in bunk beds and our youngest slept on the bottom. Our youngest child told my husband and I the dark shadow would pace back and forth in front of the bunk bed every evening when it was really late. She said it happened so often, she would just go right back to sleep because she knew he would not harm her and that she was no longer scared of him.

My husband and I believe the same dark shadow that frequently visited our bathroom and all three of our daughter’s bedrooms is the same ghost that is now haunting us in the master bedroom. Every morning when my husband left for work, I felt as if something was watching me. It became so uncomfortable that I started dressing and undressing in our kitchen. For some odd reason the dark shadow always isolated himself in the back side of the house. He never followed us to the front part the house. We thought it was rather odd, but we just felt it was best to not ever question it.

There were times my husband would complain about severe itching while laying in bed. He said it felt like something was crawling all over his body, yet every time I checked him I saw nothing. We concluded he was having an allergic reaction to the clothes detergent, so we changed it to another brand. Even after switching brands, my husband continued to complain about the constant itching, which only occurred certain times in the evenings when we went to bed. It was obvious it was not the detergent so we thought maybe it could be bed mites/bugs. Later that same evening we purchased insecticide from Wal-Mart to treat bed bugs and sprayed our entire mattresses including floors, curtains, and baseboards. For the next couple of days following the treatment, my husband slept like a baby. It was about the 5th day when my husband begin to complain again.

This left us clueless as we changed detergent and treated our room with pesticide, yet the problem continued. All of a sudden a light bulb went off in our head and we began to discuss all the weird events going on within our home in the past few months. We discovered that our ghostly visitor seemed to be drawn to females; particularly myself and our youngest daughter. What was really frightening was discovering that my husband only complained of itching moments before we were intimate. We concluded that our ghostly visitor was not happy with our relationship and would intervene anytime my husband and I embraced one another in our bedroom.

The Solution To Rid Our Home of the Visitor

After learning what upset our ghostly visitor, we decided to take action. We felt like our family was in the middle of a spiritual warfare. We knew the only solution to win was to fight back with biblical scriptures and strengthen our Christian walk. This strategy required participation from the entire family. Our family prayed together, studied the bible together, attended church services, as often as possible.  I was also told by a family friend to ask the dark shadow to leave because he was no longer welcome in our home. Although somewhat frightening, I did as told and the negative energy eventually lifted. Our dark shadow was never seen or felt again. My family continued strengthening our prayer life and Christian walk in preparation for future PCS moves.

Click Here to read other terrifying stories from military spouses.

Krystel is the mom of two and an Army Wife. In addition to Army Wife 101 she is the Co-Founder of SoFluential.com a digital media agency that connects brands with the military market. She has appeared on MSNBC ,FOX LA and formerly was a weekly contributor to HLN's "Raising America". She has written for various outlets including Sheknows and Lifetime and is a big fan of cupcakes and french fries.
October 2, 2015 by Army Wife 101 | 3 Comments

3 Comments on Tales From The Base: Beard St. Fort Knox, KY …Story #7