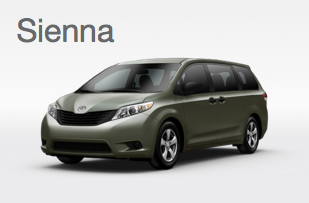 You know how I do things here at Army Wife 101 . Everything here is random and because of my fabulous Randomosity, I am part of the Toyota Women Influencer’s Network (okay I am not sure if that’s why they picked me but it sounded good). In any event I bring the awesomeness and happenings of Toyota to you on occasion plus I love that they offer that pretty cool rebate to military so I am a fan of theirs.

Recently we had a chat with some of the Toyota experts who answered all the questions any girl could ever ask about the Toyota Sienna. In this day in age people are looking for cars and vans that are good on gas and that you can still have some space in so I thought that sharing this information would be useful.

I first became enthralled with this van although I swore I would never drive one when this video went viral:

Many of the TWIN gals submitted questions and I thought it would be cool to share some of the most popular ones that are useful to our lifestyles.

I hear all the time from wives who have children or family members with special needs so the below question and I thought was a helpful one:

Q. The Sienna Mobility Vans. I know that the one seat is link driven. Do they also have driver’s seat mobility modifications with hand controls?

A.Yes, hand controls are available for the Sienna. This modification can be performed by contacting a Toyota Dealership, who will contact A Bruno Living Aids Mobility Dealer on the Toyota owner’s behalf.

Before I was in this horrific accident I must admit that I was just concerned with having my nice little SUV now safety is probably the only factor I care about so this question about the Toyota Sienna’s top safety features was  not only a great question but a useful one.

We would also like to highlight Safety Connect which includes emergency assistance, stolen vehicle locator, roadside assistance, and automatic collision notification. Safety Connect is available by subscription, but is complimentary for one year.

As I mentioned GAS is a big factor in choosing a car in this economy , The Toyota guys gave a breakdown comparison of how much gas the Sienna uses verses other mini vans.

Q. How does the gas mileage compare to other minivans?

A. Regarding MPG, here are the figures:

We owned a Sienna back when we had 2 small kids and I LOVED it. Unfortunately, when we had 4 kids and strollers and dog crate and luggage for 6 people, the Sienna just was too small.

Q. Can you actually fit a double stroller and groceries in the back?

This means that — yes — a stroller and groceries can fit inside the Sienna. In addition, with the flexible seating arrangements, you can get very creative with what you can transport in a Sienna. I (Joe) recently moved apartments, and the Sienna performed like a champ! I folded down the rear seat, and slid the second row all the way forward.

Do you have questions about the Sienna or do you own one? If so what do you love about it?

Disclosure: I was selected for participation in the Toyota TWIN community through a program with Clever Girls Collective. I was not compensated for writing this post, nor did I receive payment in exchange for participating. All opinions are my own and do not reflect the views of Toyota.

Krystel is the mom of two and an Army Wife. In addition to Army Wife 101 she is the Co-Founder of SoFluential.com a digital media agency that connects brands with the military market. She has appeared on MSNBC ,FOX LA and formerly was a weekly contributor to HLN's "Raising America". She has written for various outlets including Sheknows and Lifetime and is a big fan of cupcakes and french fries.
March 16, 2012 by Army Wife 101 | 1 Comment

1 Comment on Toyota Women Influencers Network: Everything You Want To Know About The Toyota Sienna