Home » Military Life » Commissary » Will The Commissary Furlough Closings Really Affect You That Much? 3 Tips To Get You Through The Closings!
Commissary, Onpost Living 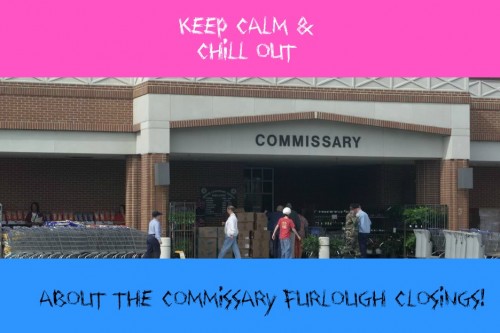 If you are a social media junkie then you probably have seen the news passing through in the military blogosphere and on Facebook that the commissaries on military installations will be closing down an extra day because of all this political furlough mess.

I am not going to even venture into what it is and all that jazz because it just makes my mind hurt and frankly is too complicated.

Anyway this means if your commissary is normally closed on Mondays then it would be closed on Tuesdays as well.

At first alot wasn’t clear about these closings. There was alot of panic and uncertainty because all the general military public was hearing was that the commissary was going to be closing an extra day and most probably thought this was forever.

Of course being the little blogger that I am, I have been researching this and have found out some good news. These extra day closings will only last for up to 11 days. They will start July 8 and end sometime around September 30th.

For me personally I am lucky if go to a grocery store of any kind more then once every other week. Yes I do need the occasional gallon of milk or loaf of bread but do I really need to go to the commissary for that? That being said I know many people live onpost and some due to transportation issues only have the commissary to rely on , it is for these people that I see the extra day o closing being an issue.

The good thing is I haven’t seen any mention of shoppettes closing down during the week, so if you really need something that bad (although a bit more expensive) then you can always go there.

The second issue I see with the extra furlough day is crowds. The weekend will have passed and people will need to replenish their basic essentials and they will have to wait two days after the weekend to do so. I foresee massive extra crowded-ness (I don’t even know if that’s a real word) at what already is a crowded place on the norm.

Lastly plain and simple the folks overseas are the ones who are going to suffer the most. There isn’t a Walmart on every corner in Germany or at all for that matter. Some already have to go to other bases because their commissaries are small. This is a huge issue!

3 Tips To Get You Through The Commissary Madness

Everyone and their mama is going to go on the weekend , especially with the Summer months approaching. If you absolutely go on a weekend shoot for early morning Saturdays when everyone is heading out to the beaches or on day trips. Sunday is my day of choice because alot of people go to church in the mornings.

Go shopping on a really odd day like a Thursday evening. I have found going about an hour before the commissary closes (depending on where you live) is a really great way to avoid the crowds.

You aren’t going to die because you can’t go to the commissary. It won’t kill you go to Walmart for just a few things. If you are high strung then calm your nerves. When hubby gets home from work get in the car and head to Walmart or your local grocery store. To save money only buy what you need…the basic essentials. If you do your shopping right during the week you shouldn’t need to shop outside of the commissary as if you are feeding the entire Army!

Do you think the commissary closings will affect you alot…share your thoughts below?

Krystel is the mom of two and an Army Wife. In addition to Army Wife 101 she is the Co-Founder of SoFluential.com a digital media agency that connects brands with the military market. She has appeared on MSNBC ,FOX LA and formerly was a weekly contributor to HLN's "Raising America". She has written for various outlets including Sheknows and Lifetime and is a big fan of cupcakes and french fries.
June 4, 2013 by Army Wife 101 | 4 Comments

4 Comments on Will The Commissary Furlough Closings Really Affect You That Much? 3 Tips To Get You Through The Closings!