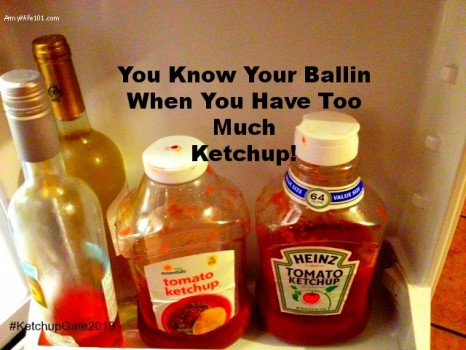 The military blogosphere  and social media world is up in arms over what…….KETCHUPGATE 2013!

You guys know I hate writing all Washington Post like with all the details and so forth. I just like to get to what I have to say out because my memory is bad.

That being said the other this article came out in which some ass-uming reporter with a long winded name that I don’t feel like trying to type out went on a rant about how we military families somehow live lavish (yup this again) and plentiful lifestyles because…wait for it… are you ready? According to the Washington Post editor the military are excessive burdens on taxpayers and the government ,because a recent visit to the Marine Base Camp Lejeune revealed there are 15 different types of ketchup in the commissary.

According to him the commissary has somehow become too humane because instead of selling surplus leftover loaves of bread and porkchops like they did back in the day, they have now become more like regular grocery stores.

You know what Mr. Washington Post Editor? I just have to agree with your wonderful in-depth analysis and financial diagnosis of the military family. My life and bank account have been so enriched by those 15 types of ketchup at Camp Lejeune, even though I probably never bothered to look at all 15 types because I probably could only afford the off brand. Come to think of it all the rich military people must live at Camp Lejeune because I don’t think Fort Bragg sells that many brands of ketchup.

Oh my word Fort Braggers we are missing out over here!

He also mentioned how amazing life is for us because the commissary has FileT Mig-Non. Now I am not trying to make us military folks sound like the bottom of the barrel , but I know I am not the only one who isn’t living it up on filet mignon every week!

You see Mr. Editor ,while you were at Camp Lejeune on assignment hiding behind your laptop (much like I do) probably living it up in your posh cozy hotel, many of us military folks are living paycheck to paycheck and trying to make ends meet like alot of America. Gosh I wonder how much you make to sit and write?

Oh sure (I cant believe I have to repeat this shiz again) we ( and I say we because I can speak for my husband) get that nice little extra $575 in tax free dollars a month during deployments , oh and yea that housing on base where they take all the so called BAH that some people act like we keep. Sure we have reduced light bills onpost and yes we have that healthcare system called Tricare and yup even some commissary benefits too with lots of ketchup that some of us can’t afford to buy.

What you forgot to throw in was in exchange for all these wonderful benefits these military members give up months and years with their families. Some give up limbs , their sanity and even their life. Sure no one twisted their hands to join but trust and believe it’s a pretty honorable thing to do for the lavish average service member salary of say oh maybe $35k a year because benefits don’t pay the bills.

I won’t sit here and pretend I was ever worried about how we were going to feed our kids during my husband’s active duty military career, but please believe that the benefits compare nothing to the endless feelings of worry and stress during several deployments on both the service member and their spouse. These so called exorbitant benefits don’t bring back the anniversaries , first birthdays , high school graduations and even funerals that so many of our brave men and women have missed. They don’t bring back limbs , minds and they certainly don’t bring back people.

So the next time you want to blame the so called moochers who defend your freedom for the economic collapse of America ,go back to the ketchup and condiment aisle at the commissary of your choice and talk to a service member and let them help you get the real facts!

Check out my friend Adrianna of Next Gen Milspouse #KetchupGate2013

Are military families really balling in your opinion…share your thoughts below!

Krystel is the mom of two and an Army Wife. In addition to Army Wife 101 she is the Co-Founder of SoFluential.com a digital media agency that connects brands with the military market. She has appeared on MSNBC ,FOX LA and formerly was a weekly contributor to HLN's "Raising America". She has written for various outlets including Sheknows and Lifetime and is a big fan of cupcakes and french fries.
June 5, 2013 by Army Wife 101 | 13 Comments

13 Comments on 13 Bottles of Ketchup On The Wall Plus Filet Mig-Non …OMG Military Families Are Ballers!