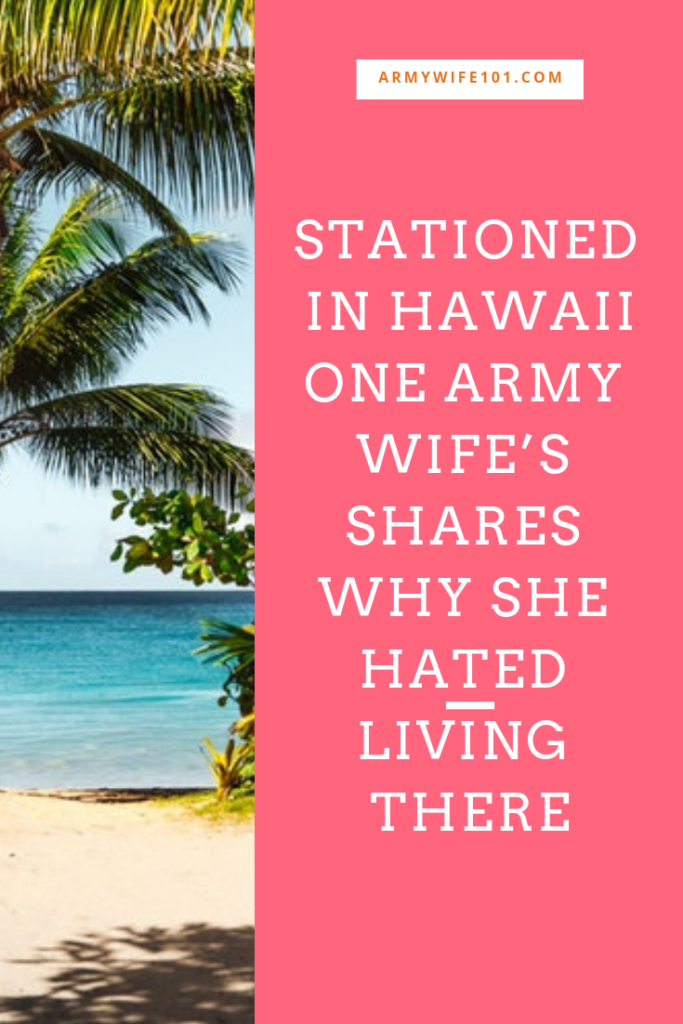 I get asked the million dollar question frequently ” So what’s it like to live in Hawaii”? “Ahh how do I answer that?” is what I ponder in my head awkwardly as I debate whether or not to give them the vacation version or the real deal.  My persona of being “Army Wife 101” makes it hard for me to tell PCSing spouses moving here, that my personal opinion of Hawaii is that it sucks living here for an extended period of time.  I do not want to ruin the thoughts of what their home will be like , so I usually give them what I like to call a “PR” answer. This is one of those cliche answers that doesn’t really answer the question , but tries to package nicely.

Well I think it’s about time I share my thoughts, seeing as to how I am constantly asked (which by the way I don’t mind) . I must warn you though some of my thoughts are not pretty, and that everyone’s opinion is different. Just because I hate it here does not mean you won’t love it.

With that I bring you Hawaii…One Army Wife’s Thoughts:

I arrived here in March of 2009 (insert the Hawaiian music here) and as I stepped off the plane and entered into the breezeway in Honolulu International Airport, I took in the scent of the Hawaiian air. Being that I was afraid of flying, it was a miracle that anyone got  me to fly over a body of water for over 8 hrs. We proceeded to the military liaison desk got signed in and hopped in the government shuttle which was to transport us here to Schofield Inn on Schofield Barracks. It was 10:30PM at night when we arrived and I was so exhausted I couldn’t focus or see well enough to see what it looked like outside the shuttle windows. We arrived here on Schofield checked into lodging and the adventure began.

Like any newbies to Hawaii, the next day we awakened, picked up our rental car and set out to explore the island. I had heard prior to arriving here that we shouldn’t try to visit all the attractions at once because you will run out of things to do , let’s just say that is true to a certain extent (more on that later). In any event I was actually happy here at the beginning. My list of reasons why I was happy are below:

* My kids were getting the experience of a lifetime. They were going to explore different cultures, different foods, beautiful scenery, beaches and historical attractions such as Pearl Harbor and the USS Arizona.

* I did not grow up in a area near many beaches, so the thought of having a few dozen surrounding me seemed pretty nice.

* The weather is always beautiful and consistent, so clothes shopping for the family was easier. Flip flops in every color sounds great to me.

*The biggest reason was that it gave members of our families a chance to come to Hawaii, when they normally wouldn’t have come here.

So there you have it, my very few reasons why I liked it it here. So I guess by now your probably saying well after all of that “What the hell is there not to like”?

Well you see I believe people get to engulfed in these fantasies of paradise. They think Hawaii and they automatically envision palm trees lining every street, a beach in your backyard and mai tai’s everywhere. Little do they know that when they arrive here at Schofield they are in for rude awakening. Schofield is in a small little dumpy town 20 minutes from the North Shore called Wahiawa. Wahiawa is ghetto. I am from NY and let’s just say I would rather walk threw any of those streets then Wahiawa even in the day time. Wahiawa consist of some fast food joints, a few hole in the wall sit down joints, some rundown strip clubs , convenience stores and a General Hospital that looks like someone swallowed the 70’s and threw it back up. Rundown apartments surround the base as well. When I want to get fast food I head in the opposite direction to a town called Mililani. If you choose to live offpost and want to live close, Mililani should be your first option as well.

The schools here are HORRIBLE!!!!! I had always assumed that if a school was onpost then it automatically was a DOD school. This not the case at all. I’ll be honest and say that I’ve lucked up and my kids have had good teachers, but damn these kids are off so much it makes you wonder how much are they really learning. Last year we went through furlough Fridays due to budget cuts, and basically every Friday the children were off. Lest not forget that every Wednesday the kids have half a day . The school day is over at 2:05pm. This is the shortest school day I have ever seen. My kid has PE once a month and my daughter has 2 recesses a day ( she is in the 6th grade). Visit here to read reviews on the schools .

Why It Get’s Old Being Here Really Fast?

1.For starters you can drive around the entire island of  Oahu in four to six  hours depending on traffic. ( I honestly think it’s less time then that , but i’ll be generous.)

2.Unless you love going to the beach every weekend, are a water nut, or are passionate about the outdoors (hiking mountain climbing) , you will quickly run out of things to do. We have a sea life park comparable to Sea World minus several attractions , space and rides. There is also WetnWild water park again water which is okay but ummm…how many times are you really going to go there? Pearl Harbor is a must see and I was honored to have the privilege to visit but naturally it’s not some place you would to go weekly. The Nex is nice to walk around but after you walk around what are you going to do ? Pearl Ridge Mall was ok until my friend got her pocketbook grabbed by a meth addict during a day time visit, so that pretty much prevented me from wanting to go there by myself. Ala Moana Mall in Honolulu is awesome but just not my frugal everyday place of shopping. It’s nice once in a while. The Swap meet is hot and nothing but rows and rows of people selling the same 5 for $20 teeshirts . It was nice when we arrived and wanted to send souvenirs back home, or when family visits and you want to take them somewhere where they can get cheap souvenirs too.

In reference to the size of the island you really can drive around the island in four hours. The island goes in one big circle. There are no bridges connecting Oahu to neighboring islands, and due to some environmental mess the ferry no longer is in operation. You can count on buying tickets for every member of your family to fly to another island if that is your thing. Speaking of other islands everyone screams about flying to them, but if your tired of being on an island…are you really going to fly to another one?  Unless you can get some great ticket prices to wherever your from( and sometimes you can get great prices) , count on using that nice hunk of deployment savings you stored. Space A is wonderful, but don’t be fooled it’s free for a reason and that reason usually consists of being trapped in a hotel or terminal of sorts at a airforce base for a few days.

Lastly I had the joyous pleasure of being caught in a Tsunami scare this past February. Imagine your husband is deployed , you wake up in the middle of the night to take a piss and you hear the disheveled looking newscaster on the local news at 1am saying expected time of impact is 11:19AM and sirens will sound at 5:30AM. Ummm excuse me my first thought is the local news is not supposed to be live at 1am and 2nd of all “impact” doesn’t sound so good. Being that my husband was deployed and I slept with my laptop my friend Stephanie buzzed me on Yahoo and informed me of how she was so scared that she was going to get a flight out of here. I took one look at my bank account and pretty assumed that my kids and I would meet our maker here on this side of the mountain in Wahiawa.

There are two more parts of living here that I have yet to discuss which is the FOOD & BUGS! That is a whole post in itself and I would rather discuss it separately. With that said stay tuned for Part 2 of “Hawaii…One Army Wife’s Thoughts on Why She Hates Living Here”.

Krystel is the mom of two and an Army Wife. In addition to Army Wife 101 she is the Co-Founder of SoFluential.com a digital media agency that connects brands with the military market. She has appeared on MSNBC ,FOX LA and formerly was a weekly contributor to HLN's "Raising America". She has written for various outlets including Sheknows and Lifetime and is a big fan of cupcakes and french fries.
September 6, 2010 by Army Wife 101 | 148 Comments

148 Comments on Hawaii…One Army Wife’s Thoughts on Why She Hates Living Here!