Divorce or even separations is a touchy subject. And in many military spouse communities (whether online or in person) anyone who admits that the pressures of military life have them contemplating it are in most cases scrutinized. But, whether we want to remain as if some people don’t have these thoughts and keep the topic taboo…the truth is it happens. 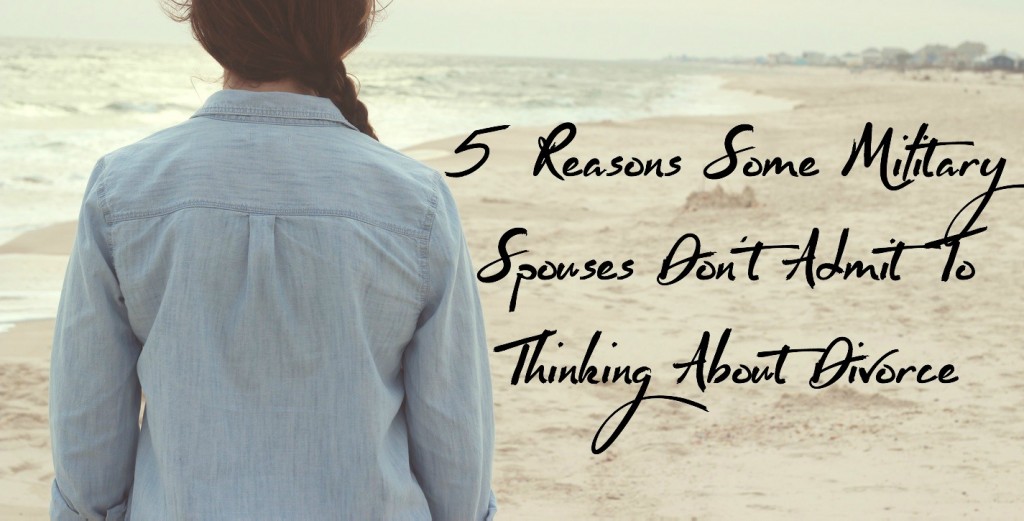 I know because there were many times that the constant missing of anniversaries, family events, and just being alone all the time got to me. It became consuming and I felt bad for myself and him. Here it was my husband is overseas serving his country in a combat zone, and I am thinking I can’t do this anymore. When I think back those frustrations existed because I felt like I had no one to talk to… that would understand. And while I am glad I didn’t give in, was I truly wrong for having those feelings? I don’t think so, but there are many people who see it differently.

Based on my thoughts and experience I wanted to share some reasons military spouses are suffering in their thoughts and not dealing with them. This blog post is in no way condoning divorce. My hope is that others will read this and reach out to a friend who may be contemplating leaving their marriage or at least change their approach if ever dealing with someone in this situation.

Many spouses will avoid mention of divorce to a military member for fear of being labeled not patriotic enough. Somehow being unhappy with a service member equates to you don’t love America or in some people’s minds.

Guilt absolutely is one of the top causes. The thought of you leaving someone because of their job may seem a tad bit selfish. Add on to that someone serving in one of the most honorable jobs ever.

There’s this annoying line that goes something like “being a military spouse is the toughest job in the military”. While I don’t find that to be true, its been programmed in military spouses head that being weak especially during a deployment is a no no. You’re supposed to be strong and independent.

Lets be honest even with all the changes happening in the military, its still one of the most secure lines of work around. The truth is many military spouses are stay at home spouses who’ve put careers on hold or got married when they were younger and have no skills to fall back on. This leads to them staying in a situation where they are unhappy.

At the end of the day I say to spouses in this situation to truly consider why you are considering this tough road. While in many cases there are other issues outside of the military causing one to consider leaving their marriage, sometimes the military can overwhelm spouses and we rush to decisions.

That famous ” You knew what you were getting into line” annoys me to no end. Yes we expect deployments and to move, but when you are in love you will initially not think about what “actually” happens when you marry into the military. The truth is many people don’t know what they are in store for and for some people it can be a lot to carry.

Work Through Those Feelings Before Anything Else

I was able to work through my feelings because I found the root of them. Before you make any rash decisions consider if the source of wanting to break away from your marriage is just the military or if their are other underlying causes.

Krystel is the mom of two and an Army Wife. In addition to Army Wife 101 she is the Co-Founder of SoFluential.com a digital media agency that connects brands with the military market. She has appeared on MSNBC ,FOX LA and formerly was a weekly contributor to HLN's "Raising America". She has written for various outlets including Sheknows and Lifetime and is a big fan of cupcakes and french fries.
January 8, 2016 by Army Wife 101 | 0 comments