Disclosure: Our stay was provided by Savannah Riverfront Marriott. All opinions are ours and are based on this experience and our previous stays.

If you’re stationed at Fort Stewart in Hinesville, Georgia or Hunter Army Airfield in Savannah—you may not even realize how close you are to a gem of a travel destination. 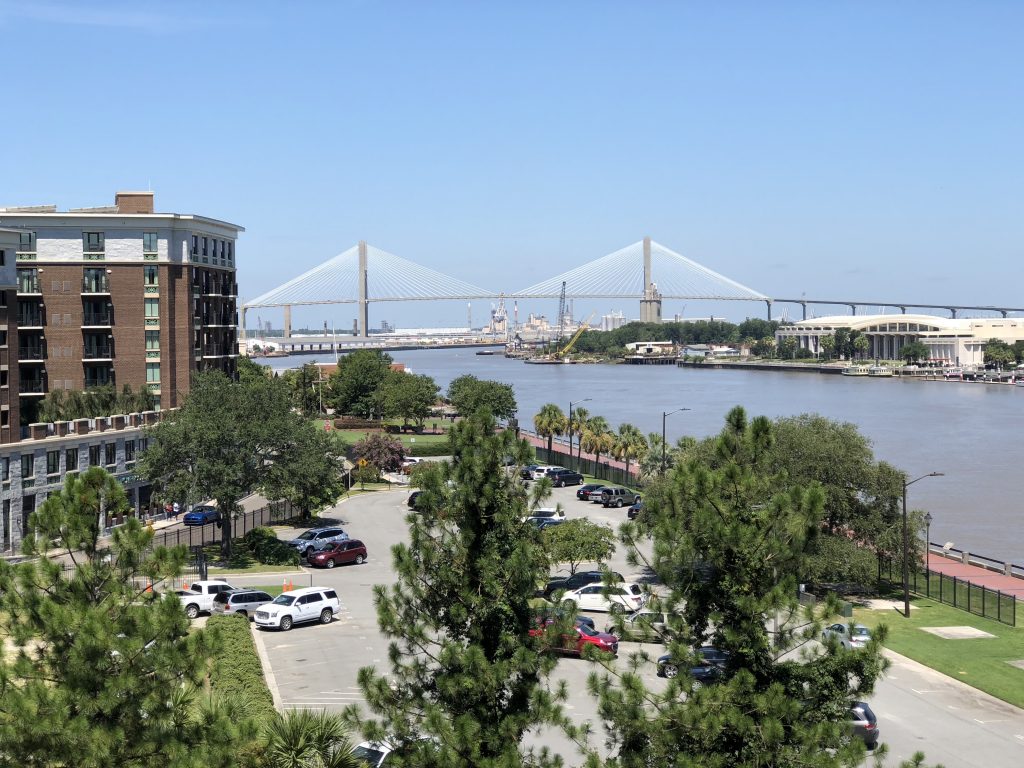 Savannah, Georgia is becoming (if not has become) one of the top travel destinations in the country for its history, southern architecture,  entertainment, food, and Saint Patrick’s Day parade ( look it up). It is an absolutely beautiful place to visit.  My family and I were stationed in Savannah for three years and fell in love with the place. And even though we live here in North Carolina now, we frequently head there for weekend getaways. I’ll be sharing a series on things to do in Savannah, but wanted to featured where we stayed in part one of “When Stationed In Savannah”. 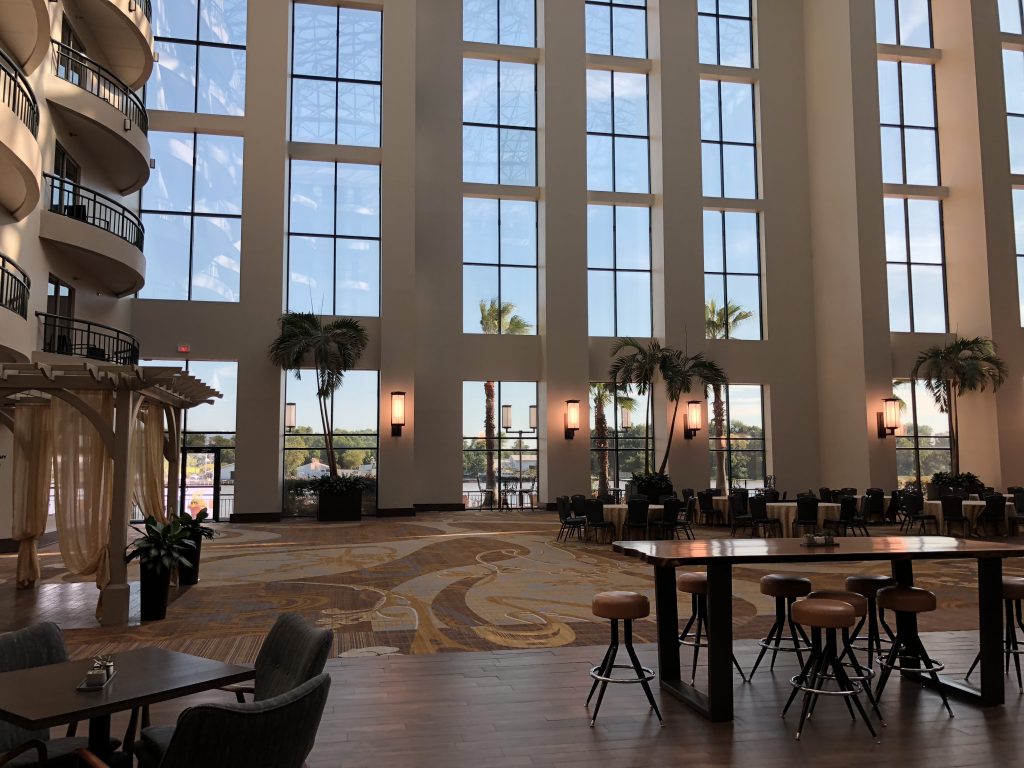 Savannah is comprised of several popular areas, but the most recognized one is River St. It’s one reason why we love staying at the Savannah Marriott. It’s nestled along the Savannah River at the end of River Street —close enough to the action, but far away that you feel like your somewhere else at the end of the night. And, in their balcony rooms, there is a beautiful sunrise with marshes in one direction, boats, and a view of the Talmadge Memorial Bridge in the other. There’s tons of space to sit with your family, talk, and take in the sailing in of ships from all over. Their atrium seating area reminds me of a cruise ship in many ways.

Our stay began with a quick and easy check-in with Wallace who flawlessly got us into our rooms quickly. While my family waited for check in they explored the lobby which is huge and seamlessly blends in with their bar area, sitting area. I love the whole open concept of this hotel. We also enjoyed the fruit and cucumber infused water which was a perfect treat when coming in from that Savannah heat (no pun intended)! 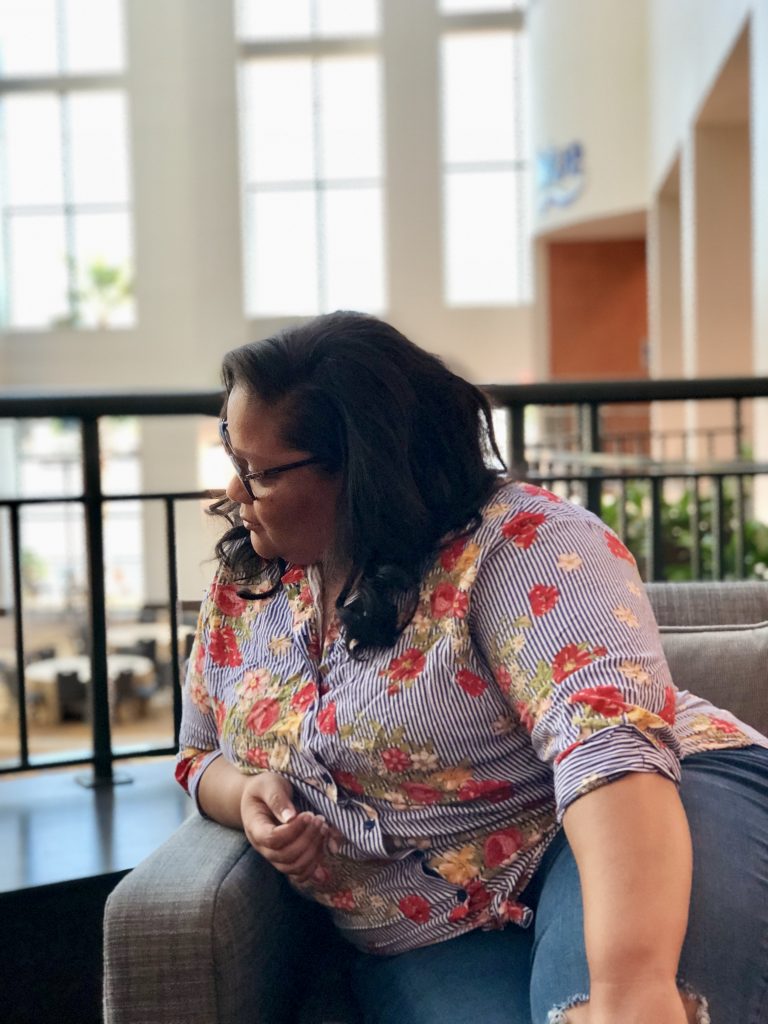 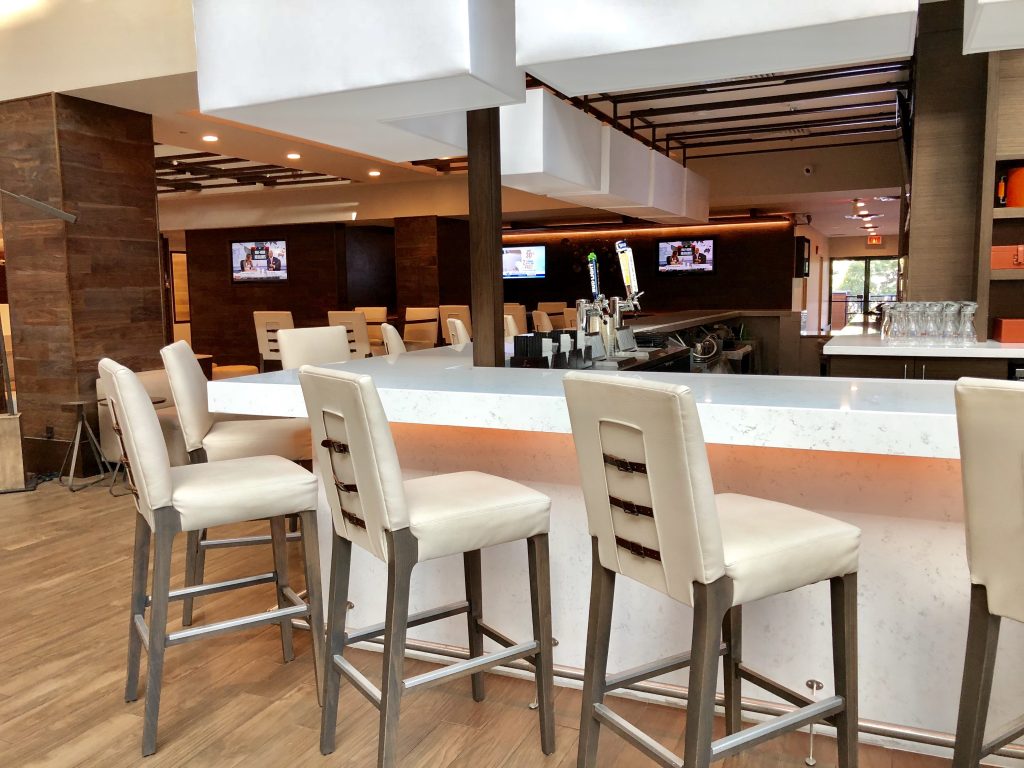 We enjoyed eating in their new modern hip “Atrium Bar” which offers generous portions of food and great views of the Savannah River. I indulged in a large Asian Chicken Teriyaki salad and a generous portion of cooked to perfection tender steak with Yukon mashed potatoes. My kids are burger fanatics and enjoyed their large order of burger and fries. We were served by a really sweet woman named Mim who was so on top of her game and knew the menu front and back helping us to make awesome choices for what we ordered. 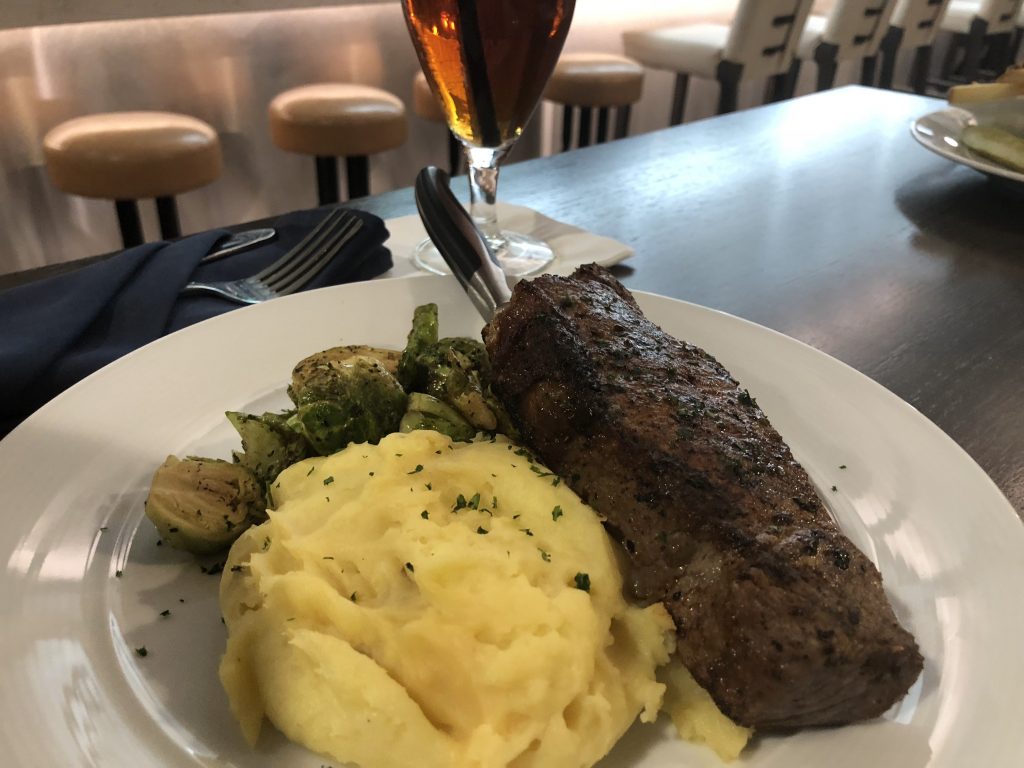 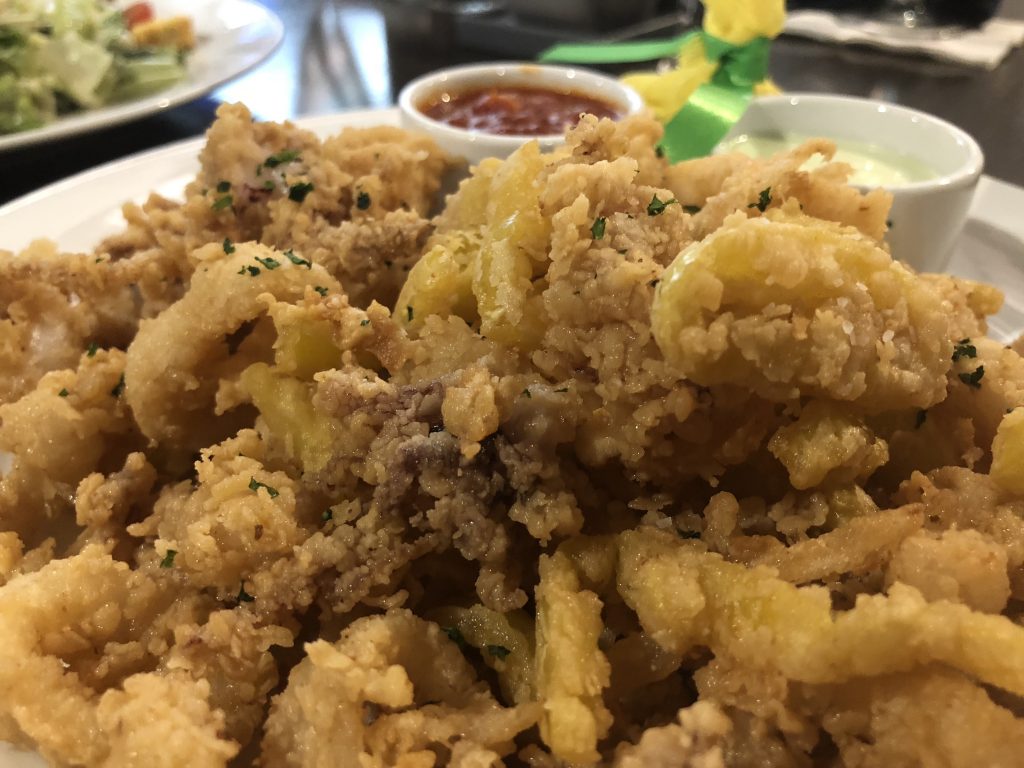 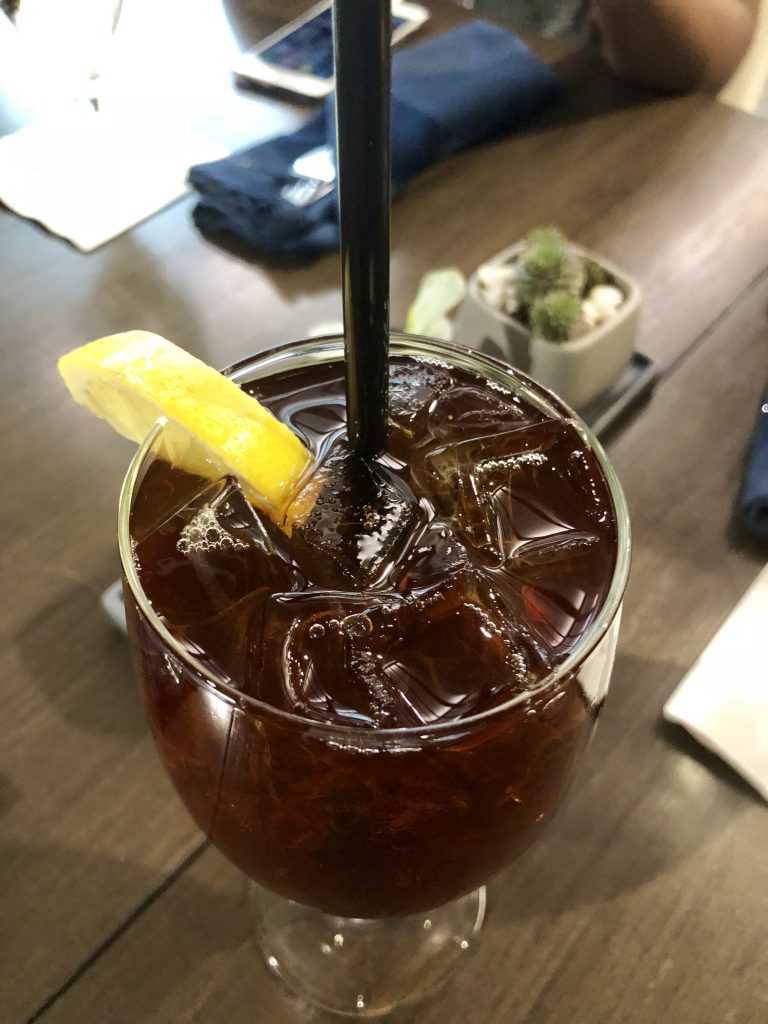 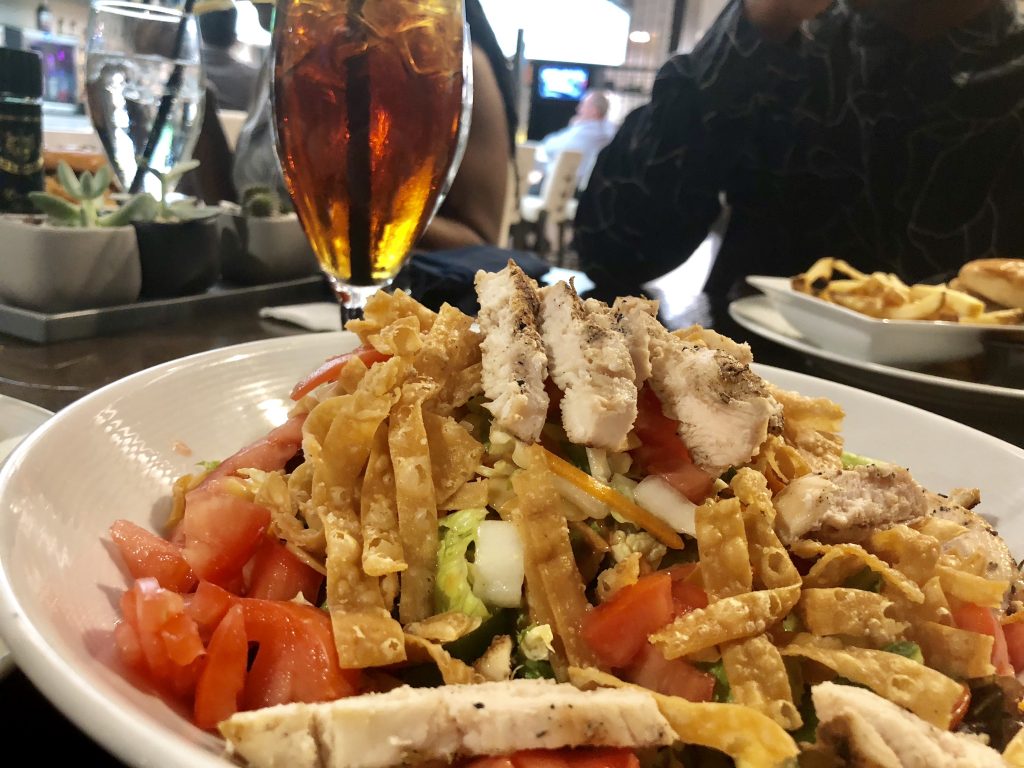 Our morning was spent enjoying coffee and an expansive buffet of fruits, pastries, bacon, potatoes, sausage, eggs, an omelet station, plus more at “Blue Savannah Bistro“. The best part was the seating near the picturesque windows with beautiful views of the ships on the Savannah River. 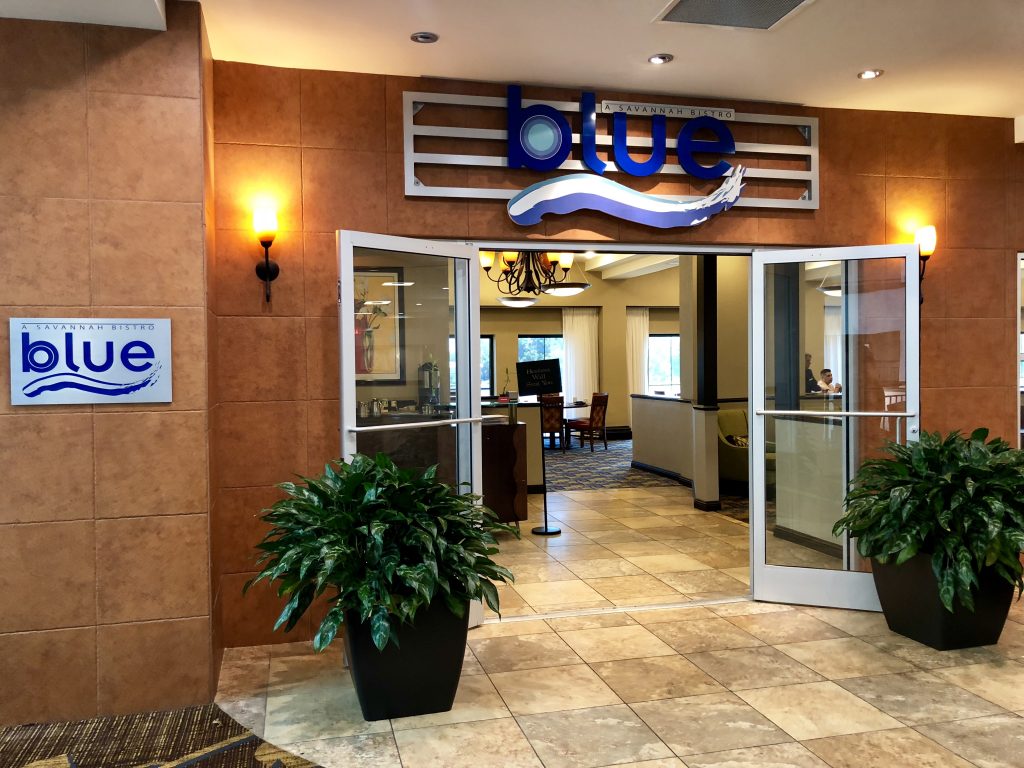 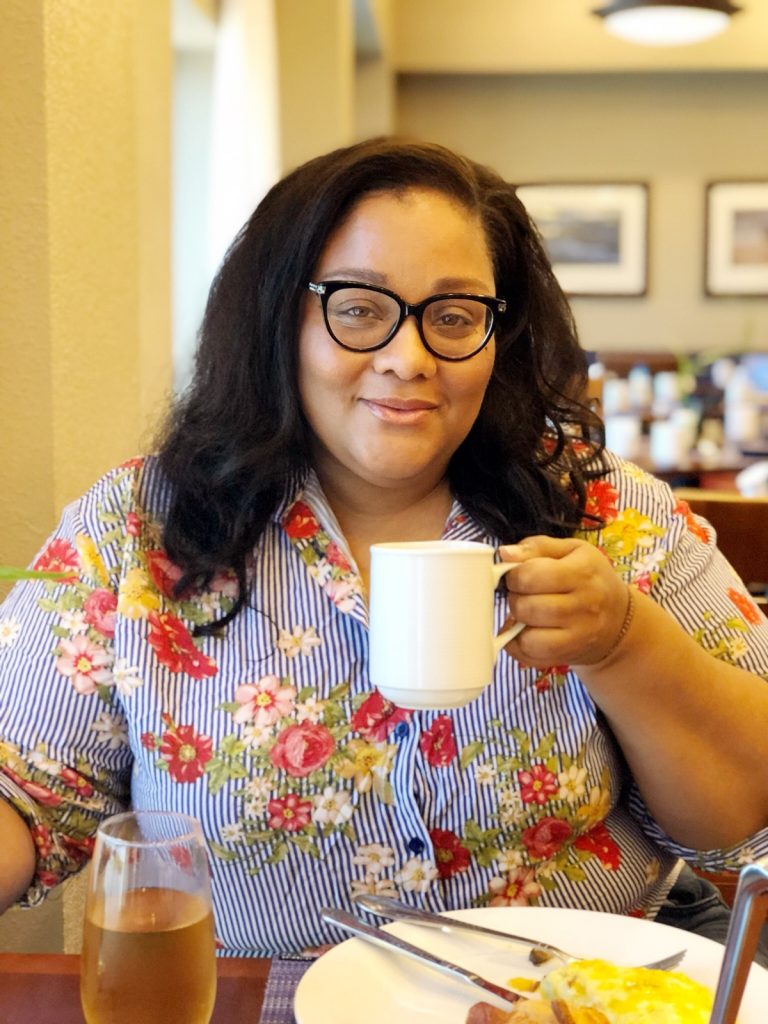 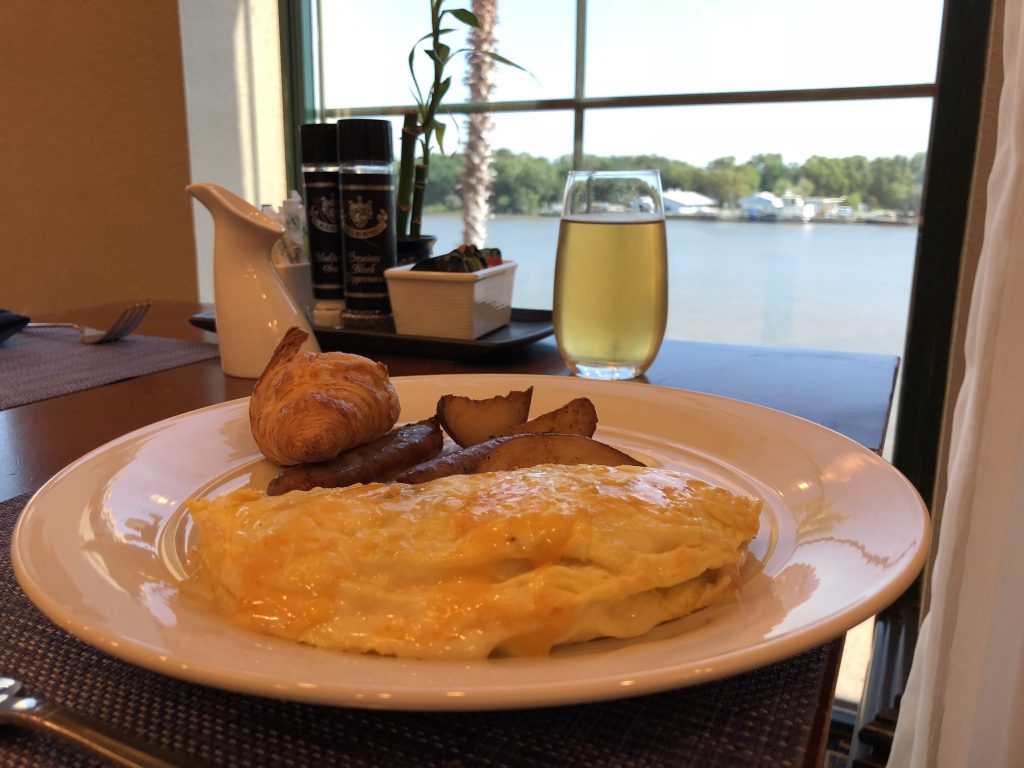 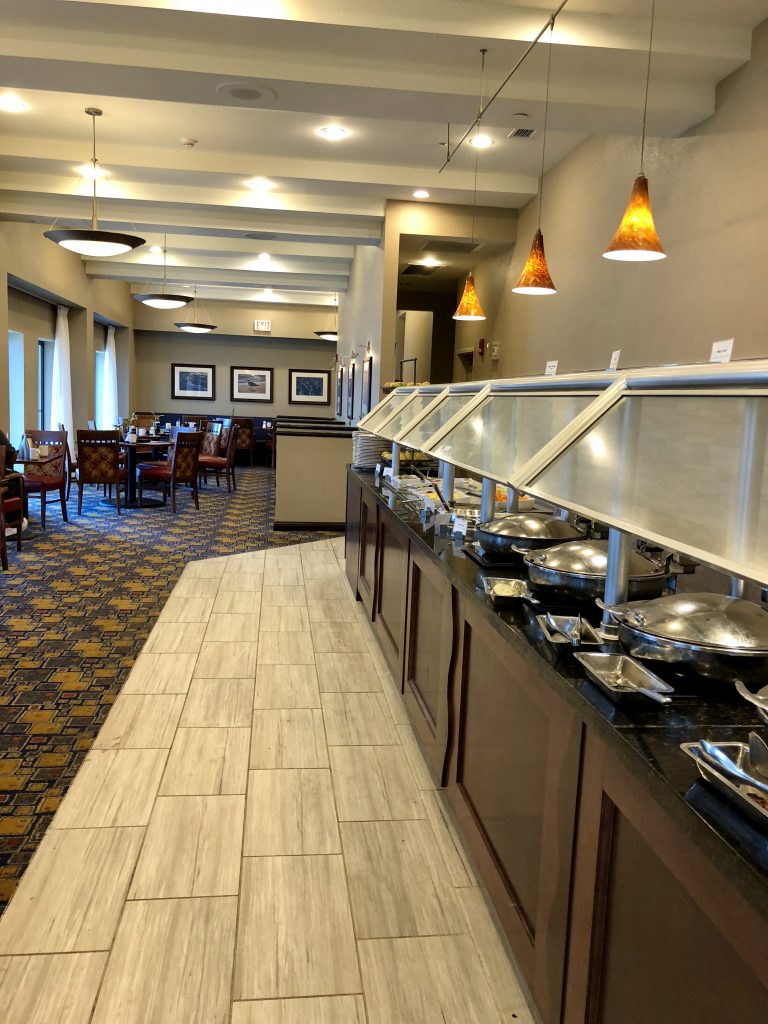 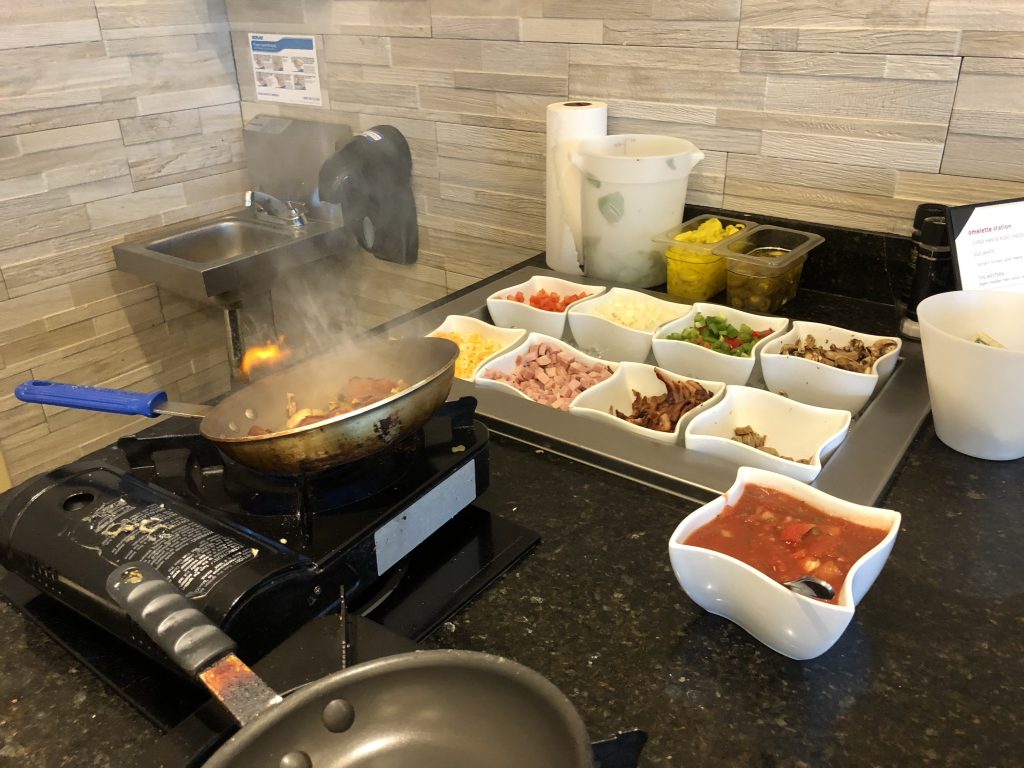 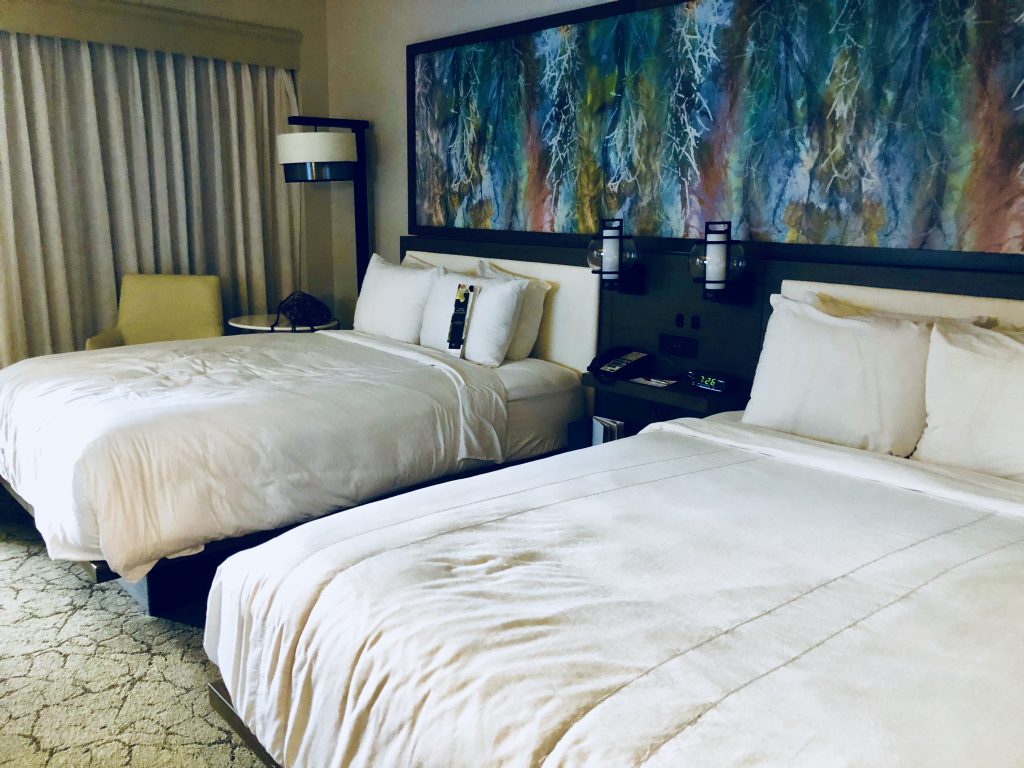 We were lucky to have two rooms. The kids received a double room with a beautiful view of the bridge and my spouse and I lounged in a large king bedroom with the most beautiful view of the river. Our room also included all the updated amenities including a TV with access to Youtube and Netflix, as well as a large lounge sofa. Marriot’s bed are always comfortable too. We literally took so many naps and we are not nappers by any means. Something about those weighted cotton comforters. 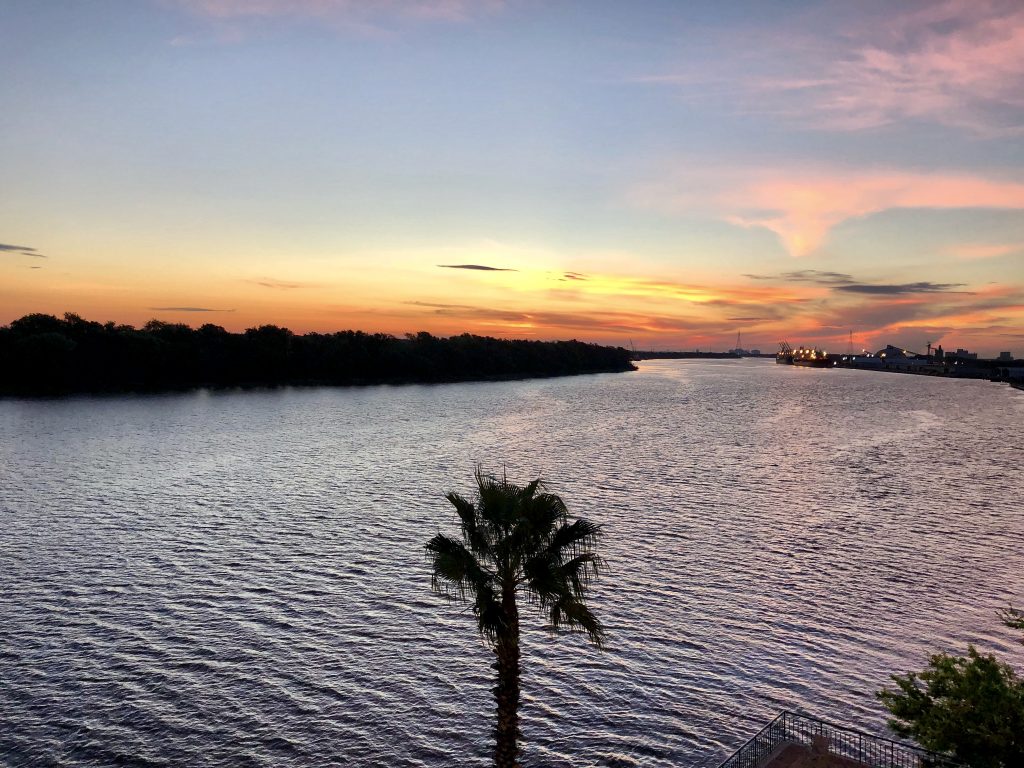 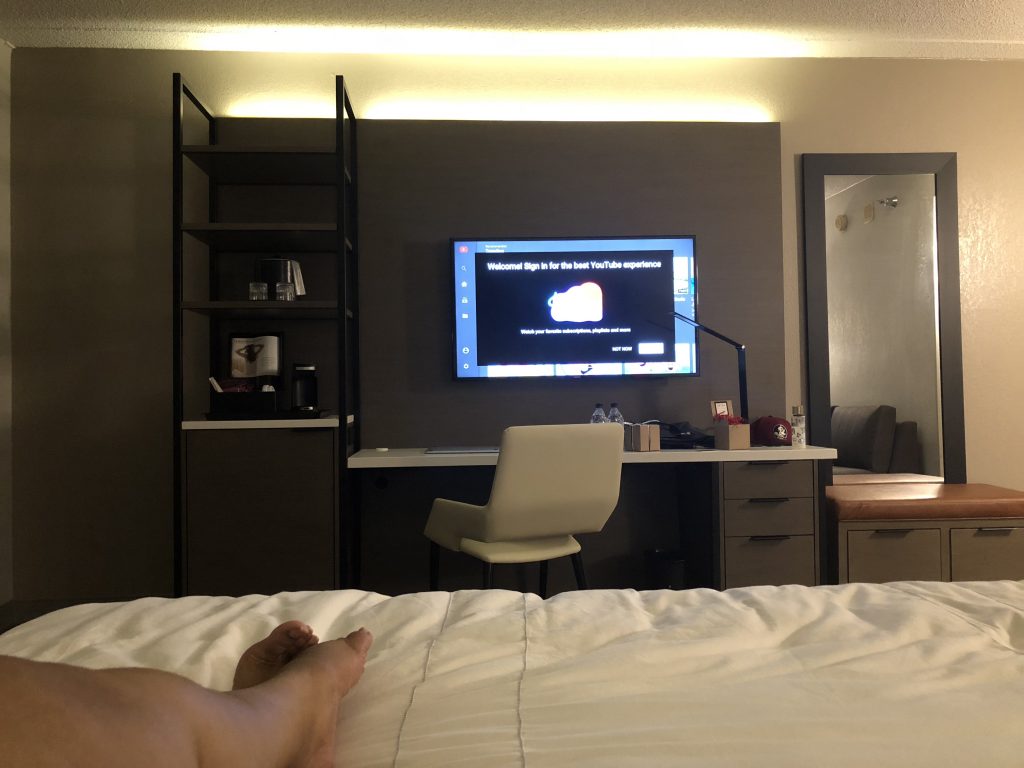 A variety of rooms are available including balconies that face the river and if you love people watching they even have rooms with indoor balconies. These rooms look over the interior of the hotel. 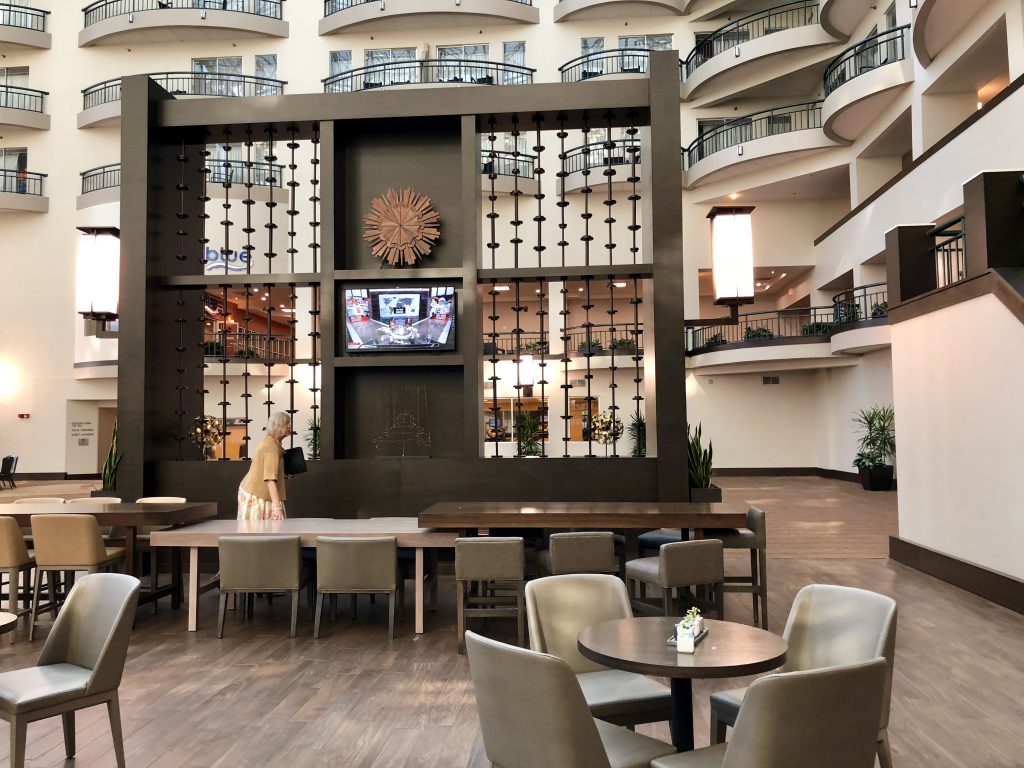 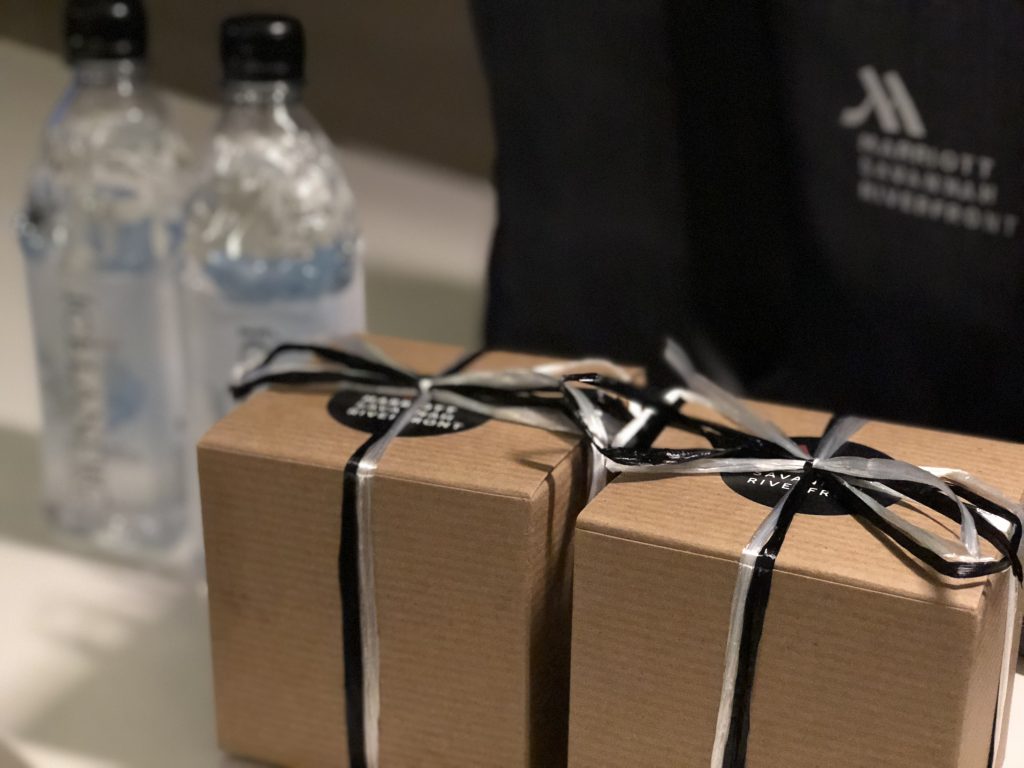 Other amenities that make this hotel perfect for staycations are their spa which provides a variety of services and a pool. Lastly, guests should definitely utilize the free river ferry that you can catch twice an hour right outside the back doors of the hotel which is a fun way to see the Savannah River and get dropped off at your destination on River Street. This hotel has the perfect ambiance to sit and people watch or jump in on the happenings. 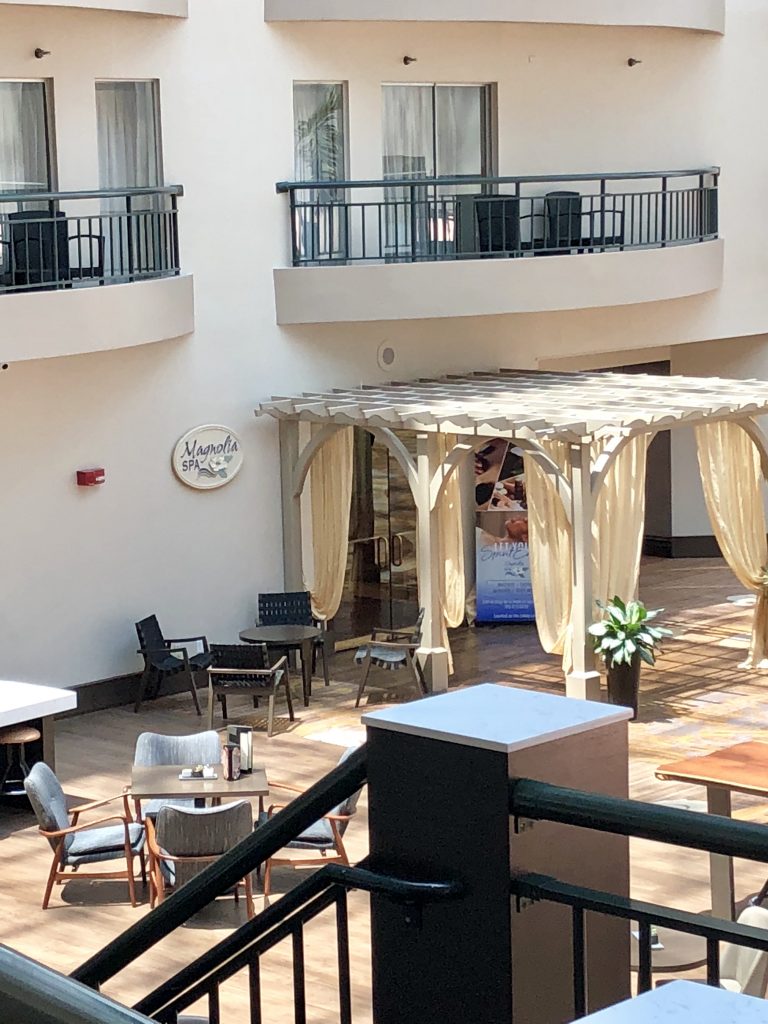 This hotel is great at deals, the customer service is great and you can expect that charming Savannah southern hospitality. The Savannah Riverfront Marriott holds military reunions, military balls and offers military promotions to personnel. Personally, it’s an amazing place for those who already live in the area to lounge for the weekend because every amenity that makes for a vacation they have.

Krystel is the mom of two and an Army Wife. In addition to Army Wife 101 she is the Co-Founder of SoFluential.com a digital media agency that connects brands with the military market. She has appeared on MSNBC ,FOX LA and formerly was a weekly contributor to HLN's "Raising America". She has written for various outlets including Sheknows and Lifetime and is a big fan of cupcakes and french fries.
September 16, 2018 by Army Wife 101 | 0 comments