By now if you spend time on social media you’ve heard the story of the female soldier who hid out in her car to avoid having to salute the 5pm flag. She then posted a pic of her on Instagram with this caption:

“This is me laying back in my car hiding so I don’t have to salute the 1700 flag, KEEP ALL YOUR ‘THATS SO DISRESPECTFUL/HOWRUDE/ETC.’ COMMENTS TO YOURSELF cuz, right now, IDGAFFFF.”

Of course this soldier has to be one of the biggest nitwits to post this on a social media platform and think that there could possibly be no repercussions or negative reactions.

However I am amazed and astonished at the severity of the negative reactions she is receiving. These include death threats, verbal attacks , racial slurs and more. 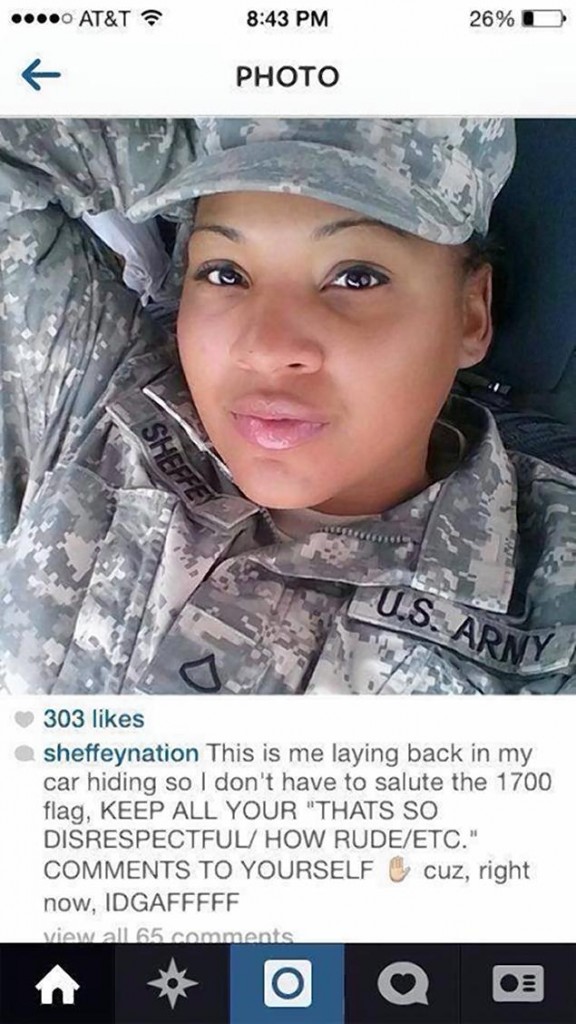 While Pfc. Sheffey ( the soldier in question) is probably one of the only soldiers who was ignorant enough to post this publicly , lest not pretend that this hasn’t been done by many military personnel of ALL races and ranks. I remember being stationed at Hunter Army Airfield and going to pick up a few things before I headed home and literally seeing  soldiers dash back into the commissary at the flag warning to avoid standing alone and saluting. What about all the military personnel  in their vehicles who by regulation are supposed to pull over safely , get out their vehicles , and render a salute? Most military installations have MP’s out to stop traffic at this time so it will not cause a safety issue, but as in many cases this does not happen because some soldiers will act as if they do not hear the ceremonious soundtrack that plays when the  the flag is going down. I’ve seen officers walking towards me and turn in a different direction to have to avoid responding to my salute. While it is customary I in no way felt disrespected. I figured that he probably responded to salutes a hundred times that day and at that particular time did not feel like saluting. Does that make him a horrible officer? Does this mean he is not competent or able to lead soldiers in a combat situation? No!

This situation brings up so many questions but the one thing thats bothers me are the  people who are too stupid to use common sense even in situations that can be deemed disrespectful. On this particular day this soldier hid out in her car to avoid saluting the flag. Does it mean she hates America or hates being a soldier? Probably not! She was like many soldiers who because it was too hot or too cold or like any working person just wasn’t in the mood (on this particular day) made a silly decision that played out publicly. Was it wrong for posting this pic in full uniform? Yes! Should she be reprimanded by her COC? Definitely ,and I am sure they will handle it properly.

However , should this woman who swore to serve in our military something that HALF OF THE PEOPLE COMPLAINING HAVEN’T DONE be receiving death threats and verbal racial attacks? No! You have all these people who want this to play out so publicly and are petitioning for her removal from duty , yet would these same people ( and by people I am referring to military spouses because surprisingly that is who seems to be really up in arms about it) go and confront the soldier who ran back into the PX, or the Officer who didn’t respond to a salute or are we just keyboard protestors?

I’ve served in the Marines , The Army and the NG all honorably for over 14 years. I love being in the military. I think I am qualified to say that some people are looking for bandwagons to jump on and examples to make out of others. If this wasn’t the military I can guarantee that there are thousands of people who have taken a short cut on the job for no other reason other then they just didn’t feel like it that day. Does it make you suck at your job? No it makes you human!

Krystel is the mom of two and an Army Wife. In addition to Army Wife 101 she is the Co-Founder of SoFluential.com a digital media agency that connects brands with the military market. She has appeared on MSNBC ,FOX LA and formerly was a weekly contributor to HLN's "Raising America". She has written for various outlets including Sheknows and Lifetime and is a big fan of cupcakes and french fries.
February 26, 2014 by Army Wife 101 | 7 Comments

7 Comments on When Selfies Go Wrong: The Salute Ducker