Home » Featured » When Mom Is The Teacher: Military Families Who Homeschool
Featured

For some military families, the first day of school doesn’t involve catching a bus and meeting a new teacher – it happens right at home.  As homeschooling gains popularity in the US, more and more military families are embracing this educational option.

Noting this trend, I interviewed military spouses, and spoke with a young man who was homeschooled until high school.

I learned that not all children in a family are homeschooled. Tisha Belme was homeschooling both her son and daughter, but shares, “This year, my daughter is going back to public school. There are some specific opportunities there that she misses, so we are happy to support her in that.”

Also interesting is that many of the homeschooling spouses never imagined they would embark on this journey. “We had never planned to homeschool so it was quite a learning curve and nothing has turned out as expected — it turned out better,” shares Alexandra Wilson.

Why They Do It

Military spouses excel at adapting and often forge ahead with what works for our families in this unique lifestyle.

Tisha’s son has Asperger’s and ADHD and says, “Getting services for him in the school system was an every day battle. Now he can delve deeply into subjects that matter most to him, and we can cater a curriculum especially for his needs, not the needs of hundreds.”

Alexandra chose to homeschool for a similar reason. “The resources and programs available were not suitable for my daughter’s special needs. Although there was an IEP in place, it was rarely implemented.”

Heidi’s son started reading at age 3 ½. They began him in a Montessori school until he was assigned a new teacher who was unable to meet his needs. “I opted to try to homeschool because I knew that I couldn’t screw up,” shares Heidi. “We fell in love with it, and that was ten years ago.”

Aside from academic reasons, military families are no strangers to constant changes, and some embrace the stability and consistency that homeschooling can provide.

“We have had 14 addresses in 17 years,” explains Heidi. “Homeschooling has allowed us to be flexible with our location and follow my husband.”

Those stationed abroad enjoyed the ability to travel. “It has been wonderful to be in Europe and take vacations during the off-season and whenever my husband can take a few days off work,” shares Tisha.

Alexandra’s family believes that learning is everywhere and that it is not limited to schools. “We consider homeschooling a year-round event. It helps with continuous progress.” 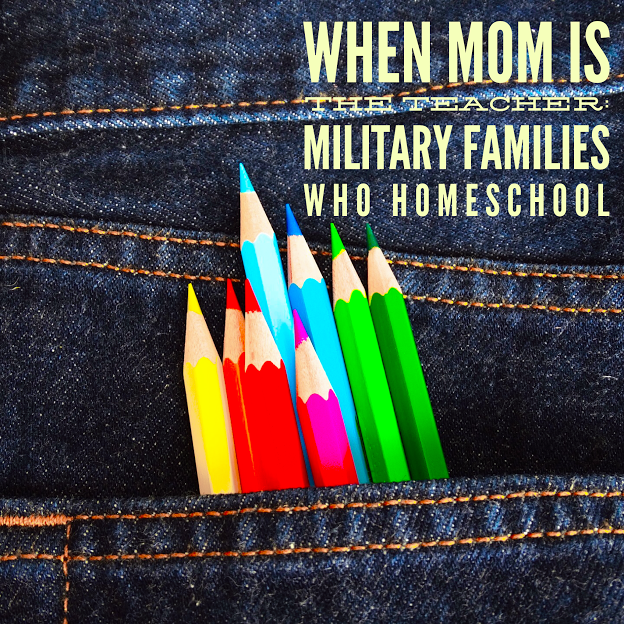 How They Do It

“I think the Internet is the best thing to ever happen to homeschooling. It brings people together in ways that were never possible before,” shares Tisha. It provides educational resources, online classes, and homeschooling groups that plan field trips, meet ups, co-ops and more.

When it comes to academic resources, Alexandra mixes and matches.  “We buy hands-on materials, books of interest, workbooks, and use YouTube. The kids have iPads with learning apps.” She advises, “If you are going to invest in learning tools, ask yourself if your child will really use them. If the answer is no, you probably don’t need it.“

Heidi adds, “We are able to teach the kids according to their interests and levels. This is crucial and makes us successful.”

Additionally, mom is not always the teacher. Some parents hire tutors for specific academic areas, children take lessons such as piano or Tae Kwon Do, and benefit from coaches and peers through organized sports.

Ahead of the Academic Game

The son of an Air Force Airman, Trevor Sorbo was homeschooled while living at five different duty stations. After completing dual-enrollment college courses, he graduated high school at age 16 and simultaneously received his associate’s degree. At age 19 he completed college, and now at age 21, he’s working on his MBA.

“For me, homeschooling let me charge ahead academically. I know I would have been frustrated if I had been held back at a uniform pace in a traditional class,” shares Trevor.

Trevor also enjoyed homeschooling’s flexibility. “We always moved in the middle of the traditional school year and my school was not interrupted. Also, the military runs itself and you run your life around that schedule. It was never a problem to take vacations, etc. because we could always set school based on my dad’s schedule.”

Trevor advises that homeschooling parents invest in an “umbrella” school, especially in high school, and recommends that students not receive a high school diploma printed at home.

He adds, “Homeschooling is a great opportunity for many. It takes significant effort for the parent and dedication from children. I know that the only reason I was successfully homeschooled was the incredible efforts of my mom.”

The Department of Defense Education Activity’s (DoDEA)’s policy recognizes that homeschooling is a sponsor’s right and can be a legitimate form of education for the sponsor’s dependents.

Other helpful links include:

Heidi closes with, “There is no ‘right’ way to homeschool. I always say, ‘I will be your biggest fan. I’m passionate about it and if it’s something you want to do, then let’s create the best setting for you.’”

Krystel is the mom of two and an Army Wife. In addition to Army Wife 101 she is the Co-Founder of SoFluential.com a digital media agency that connects brands with the military market. She has appeared on MSNBC ,FOX LA and formerly was a weekly contributor to HLN's "Raising America". She has written for various outlets including Sheknows and Lifetime and is a big fan of cupcakes and french fries.
August 16, 2015 by Army Wife 101 | 0 comments