If you ever find yourself driving down the Richardson Highway, south of Fort Wainwright and north of Eielson Air Force Base there is a little town by the name of North Pole, Alaska. 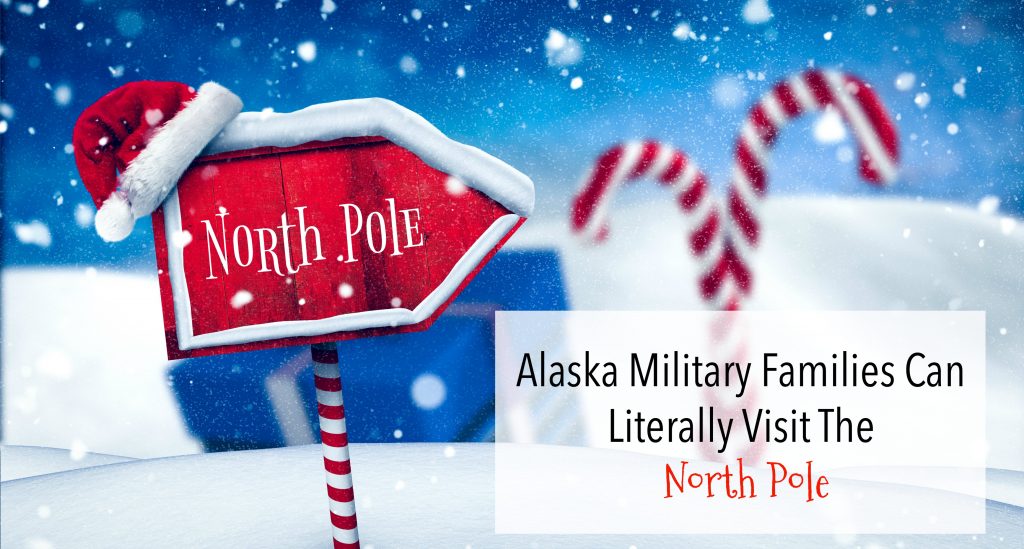 This town without question lives up to its name. Streets by the name of Santa Claus Lane and St Nicholas Drive are frequently traveled. Lamp posts are decorated like candy canes and most stores stay decorated similar to the theme. North Pole also has a 42 Foot tall Santa Claus that you can see from the highway just in case you get lost. The town has the tiniest, but busiest post office. Obviously when children write their letters to Santa they have to go somewhere right? The town receives hundreds of thousands of letters to Santa every year from children all over the world.

While you are in the town don’t forget to bundle up, depending on when you go. In the month of December the temperature averages about -20 and yes thats cold. While we were living there we had 2 weeks straight of -60s. No, thats not common but it does happen. Of course it had to happen while we lived there. I’m sure most people want to visit during the Holidays so you better stay bundled. I suggest you go during the summer. Alaska has the most beautiful summers and you wont freeze your toes off.

While we were stationed at Fort Wainwright we visited the towns biggest attraction often, It was a little place called The Santa Clause House. What once started as the towns little grocery store and then turned into the towns post office has reinvented itself in the most magical way. As soon as you pull up, you notice the reindeer. You can feed and pet them. They really do love the attention, and your children will love visiting with Dasher and Dancer and Prancer and Vixen, Comet and Cupid and Donner and Blitzen. Rudolf is always sleeping though. Thats right the Big Jolly man is there as well. Its rumored that he lives above the store, but thats not confirmed. Im sure he keeps his actual home a secret but who did you think received those hundreds of thousands of letters. Besides, the towns name is North Pole and we all know who lives at the North Pole.

Your kids will be on cloud nine when they see all the amazing things, but once you walk into the store its not to shabby for us adults. They have every type of ornament you can think of. Christmas stores everywhere only dream of having the magic that this home of Santa has. You can even get your kids, friends, or family a personalized letter from Santa to be delivered whenever you prefer. Its Christmas time year round in this little town and a must see if your family ever finds themselves stationed in Alaska or if your just there on vacation. If you do go just for a visit, remember in the summer everything books fast so book your travel and hotel accommodations far in advanced because this tourist attraction is a must see.

Krystel is the mom of two and an Army Wife. In addition to Army Wife 101 she is the Co-Founder of SoFluential.com a digital media agency that connects brands with the military market. She has appeared on MSNBC ,FOX LA and formerly was a weekly contributor to HLN's "Raising America". She has written for various outlets including Sheknows and Lifetime and is a big fan of cupcakes and french fries.
December 16, 2016 by Army Wife 101 | 0 comments