Home » Military Life » Onpost Living » DAMN IT I DON’T FEEL LIKE GETTING UP: 5 THINGS YOU CAN DO TO MAKE WAKING UP FOR PT EASIER FOR YOUR SOLDIER
Onpost Living

My husband is not demanding . In fact he is pretty easy going which sometimes can make me slack on (I guess) what should be my wifely duties. I’ve shared before how I use to pretend I was sleep while the hubby got up to go to PT in the freezing cold and rain. I didn’t want it to be so blatant in his face  that I was going to remain comfy , cozy and warm in our bed while he had to go run and exercise in the cold. I know some of you have soldiers who are gung ho and get up proud and happily. I commend them! However there are quite a few spouses whose soldiers just can’t seem to get it right in the mornings and we have to nudge them along.

While I am in no way trying to take you back to the June Cleaver era I am a realist and I know my husband’s health and how well his day starts off makes all the difference in how his day goes. His working is what provides for our family so I am willing to do whatever to make it better for him. Don’t get it twisted though…I am nobodies maid but I am his helpmate.

The way I see it is, you don’t want your spouse pushing the envelope of almost being late all the time. That’s what causes unwanted attention to be placed on what otherwise is a good soldier. If I had to get up every morning and fight gate traffic, deal with weather conditions and run really early I may move a bit slow too. Hopefully these tips from readers and talking to my husband help just a bit! 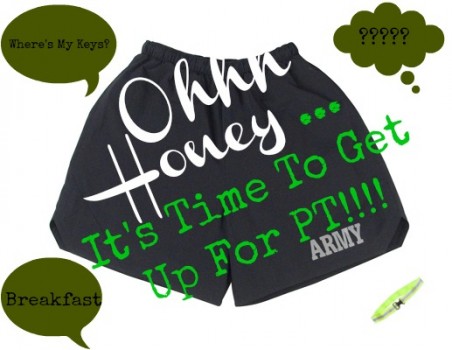 Something In The Tummy Prepped Ahead of Time: Unless both of you are going to get up at the butt crack of dawn every day then a smart move is to cook one or two breakfast items the night before. This could be boiled eggs, egg muffins (simply whip an egg add whatever ingredients you like and bake in a muffin pan then freeze or refrigerate) muffins, etc. If he is a coffee drinker set up the pot the night before. There is nothing worse than sending your loved one out to run and exercise on an empty stomach.

That Damn PT Belt: One of our biggest struggles was that stupid PT Belt. Just when I thought I had him out the door and on his way he would come back in the house because he forgot it. Then because he dropped his clothes wherever, we would have to go on a treasure hunt for it. One of my readers recommended a cheap small kids laundry basket for PT clothes only. She stated that she didn’t like her hubby’s PT stuff in with regular laundry anyway and that this was a better way to keep track of his PT inventory. Additionally nothing ever went missing.

Warm Or Cool Up The Car: Warming up the car especially in the winter can be a time guzzler. If you are fortunate to be able to go back to bed, it won’t kill you to go and prep the car ahead of time.

A Little Positive Energy: Actually getting up with your soldier and pushing him along can make all the difference. Oh, and I don’t mean in a nagging way! My husband has personally told me that there were many times he was in a sh**&^ mood but the fact that I got up with him and started off the day with some great conversation made all the difference.

Know Your Soldier’s Routine: Even if you aren’t the cooking type , knowing some of the things your soldier does in the morning can be a big help. Look at his daily routine as a checklist and help fill in the gaps.

How do you make getting up for PT easier for your spouse or do you even bother? Share I want to hear!

Krystel is the mom of two and an Army Wife. In addition to Army Wife 101 she is the Co-Founder of SoFluential.com a digital media agency that connects brands with the military market. She has appeared on MSNBC ,FOX LA and formerly was a weekly contributor to HLN's "Raising America". She has written for various outlets including Sheknows and Lifetime and is a big fan of cupcakes and french fries.
October 29, 2013 by Army Wife 101 | 3 Comments

3 Comments on DAMN IT I DON’T FEEL LIKE GETTING UP: 5 THINGS YOU CAN DO TO MAKE WAKING UP FOR PT EASIER FOR YOUR SOLDIER