It’s 1:38am as I begin writing this post. I was awakened from a deep sleep by the sounds of what sounded like people climbing through my front windows and landing with a thud on my wooden floors.

I’ve planned for this moment forever. Of course half of me is already calculating what I am going to do if it’s not someone breaking in but rather zombies who have managed to break my windows and make their way into my home like on “The Walking Dead”. I say to myself “I got this” because if it’s zombies it’s one swift move to their head I will need to make.

In true ninja form (okay maybe I am exaggerating but I move pretty fast and quietly) I hop out of bed and grab my machete like knife (because every military wife should sleep with one near by or a good ole fashioned bust you upside your head baseball bat) which I pull out of it’s case and quickly admire. I turn on my bathroom light and then I tinkle, because I can’t fight with a full bladder.

I hurry out the bathroom still listening for those thumping sounds but all I hear is the wind and the occasional clang of my trash can outside.

Still because I am a paranoid freak and even though my alarm is still engaged, I believe that someone or something has made it’s way into my home and managed to trip the alarm. I am not worried about the safety of my children because my daughter is closed up in her room and my little one is nestled in my bed. 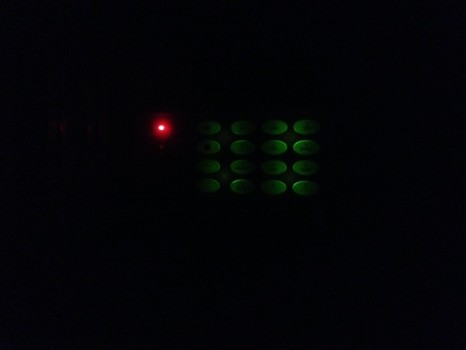 Finally I grab my phone and push 911 into the keypad. I stand there for about twenty seconds puzzled as to how I am going to carry this phone and the knife and simultaneously stab the zombie in the head like “The Walking Dead” says your supposed to do, or how I am going to fight off Jeffrey Dahmer’s little cousin who has broke into my home. I finally decide to lay the phone on the floor figuring that during this encounter I will get a second to hit the “call” button. Subconsciously I wonder about those extra steps that will be added to dial out once my phone locks, but screw it I will figure it out later.

I open my bedroom door really fast and hold the knife which is about the length of three rulers at an angle instead of straight out just in case it’s my daughter. I observe and step out my room really fast and look down that damn flight of stairs which is the whole reason I am paranoid in the first place. I hurriedly turn on the stairwell and hallway lights , as if all the light will protect me.

After I determined that no one is upstairs I begin my two steps at a time side ways jitter downstairs ,and when I make it to the bottom I quickly dash to the main light switch for the living room. I observe making sure that I don’t wind up on tomorrow’s front cover and that the lunatic isn’t hiding behind my couch waiting to make his move the minute I turn my back and go upstairs.

Fortunately I am happy that I don’t have to use my military precision style ninja moves tonight because it was just the wind causing the house to creek.

Bottom line maybe watching “The Walking Dead” religiously isn’t the smartest thing to do during deployments or anytime the soldier boys are away!

It’s 2:37am now and I am heading to bed again to watch the second or third repeat of Bravo: Watch What Happens Live!

Click here to check out “A Few Stupid Reasons I Can’t Sleep During Deployments, Duty, and TDY’s!

By the way husband is not deployed just has a job that keeps him on the go alot but I thought it would be great add this to my series I started when he was deployed because I know other wives go through this.

Krystel is the mom of two and an Army Wife. In addition to Army Wife 101 she is the Co-Founder of SoFluential.com a digital media agency that connects brands with the military market. She has appeared on MSNBC ,FOX LA and formerly was a weekly contributor to HLN's "Raising America". She has written for various outlets including Sheknows and Lifetime and is a big fan of cupcakes and french fries.
October 16, 2012 by Army Wife 101 | 1 Comment

1 Comment on Deployment Diaries: Zombies or Robbers…One of Them Is In My House!