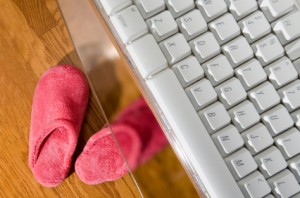 As mentioned in previous blog posts I have told you that I have been a work at home mom since 2004. I started off working as a dispatcher for an adult phone company, which meant taking billing info from pervs , then there was West in which I was a customer service representative , and after that I got hired to do virtual human resources all from the comfort of my own home. I currently hold several work at home positions now.

In all of the job positions I have held, I have found each and everyone of them through a work at home forum or community. I recently read another article in which a military spouse suggested to find wah jobs on Craigslist. I have to say I wouldn’t recommend that. You see Craigslist as you may know, is a breeding ground for scammers. Many of the work at home jobs placed on there are pyramid type schemes, or people portraying as if they are part of a company when they are really just affiliates. Now affiliate marketing is not a bad thing, but it can be if the person applying for the job thinks they are applying for an actual job and not a sales or (very low paid) commission based position.

Employment sites such as Monster.com and Careerbuilder.com are okay but usually their virtual (telecommuting) listings include jobs that are highly technical or specialized,which in most cases the everyday mom and spouse (who is looking to pocket some spare change) is not looking for.

Please do not fall for those envelope stuffing ads in the back of magazines. They are fake and will take your money with nothing ever in return.

Lastly I am pretty sure some of you have received those emails about making lots of money doing data entry. BS!!!

Data entry jobs are extremely hard to come by in the work at home field , and when they do become available they are usually geared towards the medical transcription field. Occasionally you will find a data entry job opening for other then medical, but I can almost guarantee you, it won’t be in your email.

If you are seriously seeking an at home job or just a what I like to call a “Chump Change Gig” then head on over to the work at home forums I swear by and have been for 6 years. The great thing about these particular forums is that ,you will find a ton of people who already work for them and can guide you in the right direction. I also like the fact that when a job listing is a scam , the forum members are right on it which in the end can save you time and possibly your money.

http://www.ratracerebellion.com (Thanks to a visitor for reminding me about this one)

You can read previous post by Army Wife 101 on working from home at https://armywife101.com/?s=legit+work+at+home

I have also added a section called “Pocket Change Gigs” which are small tasks I do to keep pocket change flowing. It won’t pay your mortage, hell it might not get you a full tank of gas but money is money! You can sign up via the Pocket Change Gigs to bring yourself some pocket change too. I’l be adding more , as I seek out the legit ones.

In the following weeks I will be doing more blog posts on legit work at home jobs, new places to find them and companies that are hiring for telecommuting positions.

Krystel is the mom of two and an Army Wife. In addition to Army Wife 101 she is the Co-Founder of SoFluential.com a digital media agency that connects brands with the military market. She has appeared on MSNBC ,FOX LA and formerly was a weekly contributor to HLN's "Raising America". She has written for various outlets including Sheknows and Lifetime and is a big fan of cupcakes and french fries.
October 7, 2010 by Army Wife 101 | 50 Comments

50 Comments on Places You WON”T find a Legit Work At Home Job!