Home » Featured » Betrayed: Special Incentive Pays Could Be Gone By Dec 31st Plus Cuts to Current and Future Military Retirees Pensions…If Your Spouse Is A Lifer and Plans on Retiring or Receives Special Pays Then You Need To Read This!!!!
Featured, News

So there are plenty of military news websites that will give you the news with the big fancy words and you will damn near need a degree in “whatthehelldoesthatmean-eology” to figure out. Fortunately I don’t have that particular degree and sometimes I need things broken down stupid proof for me to understand.

You may or may not know there has been a big rise up in the military community ,as it has come to light about a proposal known as the Bipartisan Budget Act of 2013 that will cut COLA (Cost of Living Allowance/Adjustment) by 1% every year until the age of 62 for retirees and future retirees.

Additionally, if the National Defense Authorization Act is not passed by December 31st, it would  cut incentive pays such as hazardous duty, and combat pay, reenlistment bonuses and special skills pay for military personnel, according to NextGen Milspouse.

According to MOAA (Military Officers Association of America) The cuts will have a devastating and long-lasting impact. By age 62, retirees who serve a 20 year career would lose nearly 20 percent of their retired pay. An E-7 retiring at age 40 today would experience a loss of $83,000 in purchasing power – an O-5 would lose $124,000. 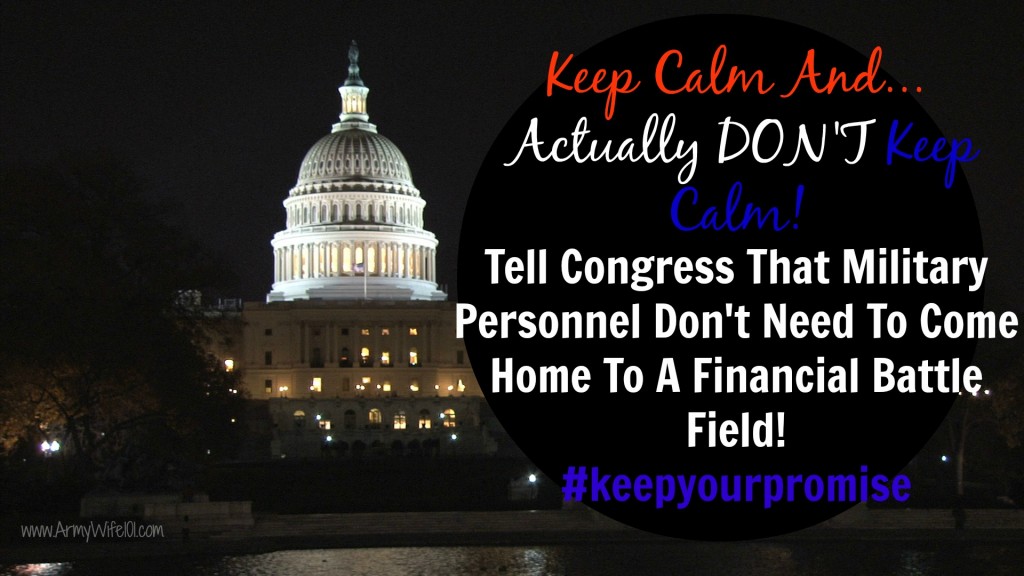 Generally most people join the military for 4 reasons:

They are patriotic and want to serve their country and earn a decent living at the same time.

They are going down a dead end and the military is the way for them to straighten up.

They are entering the military to get the GI Bill and then pursue their education.

They want to serve, earn a decent living and RETIRE.

For some it’s a combination of all of these.

The point is shouldn’t a person who is brave enough to join the Armed Forces and sacrifice so much of their time to protect our freedoms be able to retire and not have to worry about all their hard work and earnings being taken away? Why should military personnel have to risk their lives, leave their families, and give up precious time so the “thumb twiddlers” in government can snatch it away anytime they want.

Why oh why is the military constantly being sacrificed and put on the front burner for all the negative things? I don’t do politics but I can tell you this, there are a whole lot of lazy butt people sitting on their arses collecting government assistance , yet somehow they get to keep collecting it. Now don’t get me wrong I believe some people truly need help. I am not one of the people with their nose up in the air who believes government assistance shouldn’t exist. It’s easy to say that it shouldn’t until something tragic or unexpected happens and you are one of those people who need it.

I digress! My point is that Congress needs to get it together. Readers this isn’t a battle of parties when it comes to US MILITARY PEOPLE. At the end of the day when it comes to YOU, it’s not going to matter what side of the political spectrum you are on. You will be one of the people whose special pays or retirement is cut.

Right now I am part of the MILITARY PARTY and we truly need to work together to tell our elected officials that doing this will affect retention and morale in the military.

If you are on Facebook share this post with the hashtag #KeepYourPromise . Many of us in the online news and blog communities are coming together to urge congress not to pass these acts or remove the parts of the acts that affect military pay. We need you to share your thoughts about these issues on social media and with your Senators and Representatives. You can write these people by clicking here.

I’ve said it for years that Congress has  the utmost nerve to think that they deserve the protection of America’s brave , yet you take away everything they work for and truly deserve. Our military already have a battle field in combat zones. They don’t need to come home to a financial battle field.

Krystel is the mom of two and an Army Wife. In addition to Army Wife 101 she is the Co-Founder of SoFluential.com a digital media agency that connects brands with the military market. She has appeared on MSNBC ,FOX LA and formerly was a weekly contributor to HLN's "Raising America". She has written for various outlets including Sheknows and Lifetime and is a big fan of cupcakes and french fries.
December 13, 2013 by Army Wife 101 | 0 comments