This is a sponsored post on behalf of Warner Bros. Pictures.

Do you remember what you were doing on September 11, 2001? I do. Those catastrophic attacks on American soil launched the reasons our spouses still deploy to Afghanistan now.

We all know the history of that tragic day, but what happened on September 12 may surprise you.

If the film “12 Strong” is not yet on your radar, it should be. Perhaps you’re aware that there’s a new Chris Hemsworth movie coming out (we don’t blame you), or that there is a post-9/11 film that meshes horses with modern-day warfare technology. Intrigued? 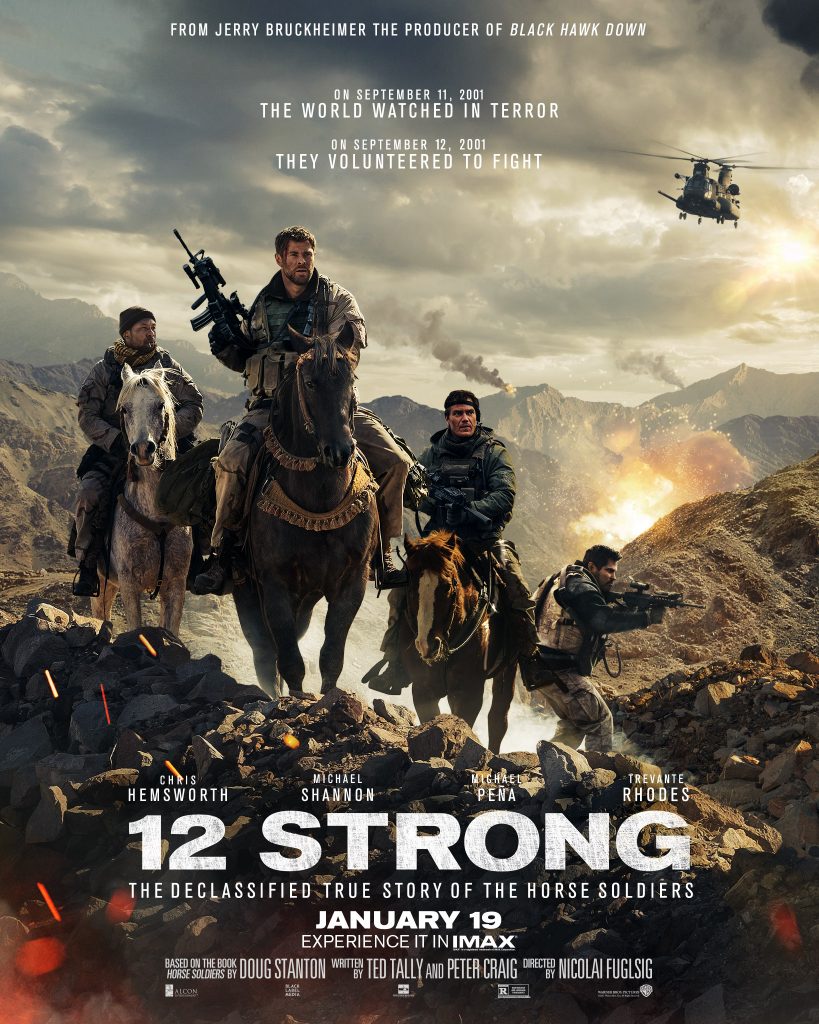 “12 Strong” is in theaters January 19 and is based on unbelievable real-life events. The film depicts the once-classified mission of an elite group of 12 men in the U.S. Special Forces who volunteered to immediately deploy to Afghanistan to fight the Taliban and their Al Qaeda allies following the attacks on 9/11. With little intel, an unfamiliar ally, and while fighting on horseback, this brave group of underequipped American heroes relied on special training, strategy, diplomacy, and relationships to fight the overwhelming odds and transform from soldiers to warriors.

Based on the book “12 Strong: The Declassified True Story of The Horse Soldiers” by New York Times Bestselling author Doug Stanton, “12 Strong” is packed with history, courage, action, intensity, and heart.

Meeting the Talent Behind 12 Strong

Warner Bros. Pictures sent me to Hollywood to preview the film, and meet the cast and crew of “12 Strong.” They provided travel and accommodations so that I could attend a press junket and an intimate roundtable discussion with Chris Hemsworth.

Yes — that’s right — Chris Hemsworth. He was just as incredible in person as one would hope.

The original book by Stanton was highly researched, and the screenplay captures much of its spirit. Military consultants were utilized, and the film even stars veteran Rob Riggle, who deployed with the Marines shortly after the attacks on 9/11.

Director Nicolai Fuglsig shares, “It’s an homage to the human spirit, you know? I mean, both on the
Afghan and American side, all these heroes were just ordinary people, and it could be a friend, your neighbor, and under extreme circumstances, they all rose to the extraordinary.”

A story of ordinary people doing something extraordinary sums up “12 Strong” so very well.

The dedication to authentic military storytelling and the inclusion of the military family perspective was refreshing.  Plus I couldn’t help but feel a bit starstruck amidst all of this talent in Hollywood. 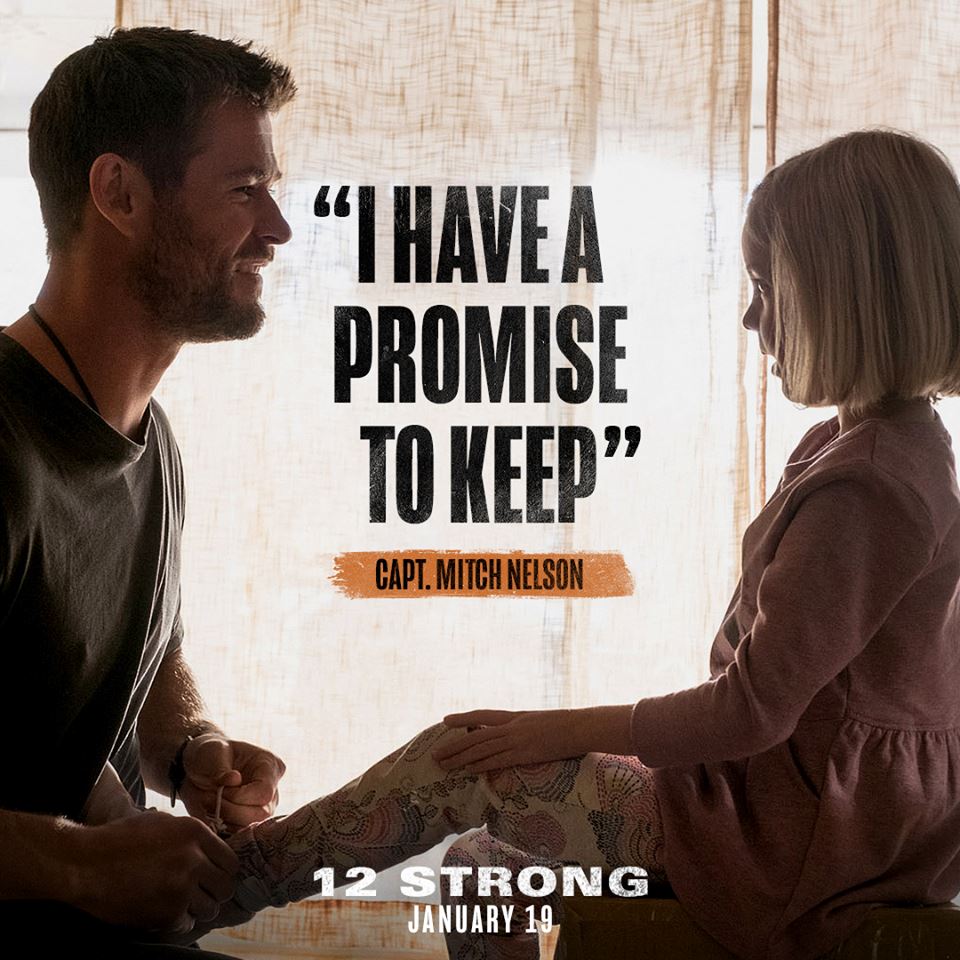 “How do you love your family and leave them to go to war?” — Hal Spencer (12 Strong Movie Quote)

Behind the heroes of “12 Strong” stand their families — wives and children, supporting them on the homefront. What does the cast and crew of “12 Strong” think about military families? Here are some powerful takeaways:

The women offer strength and support, hold down the homefront, and motivate. When the soldier returns home and asks, ‘What’s broken?’ There is nothing broken because she’s already fixed it. I wanted to portray just how important the military families are.” — Doug Stanton (Book Author)

I think it’s very important in a war movie or a film about the military that you not only get to see what it’s like for these men to leave their wives and their children but also the effect it has on their families.” — Molly Smith (Producer)

I really admire the strength of the families of every soldier who have been in those moments.”  — Elsa Pataky (Actor)

I live in Australia and I left four days ago, and my daughter said, ‘But you just got back from work, why are you going again?’ And I was thinking about it, and it brings me to tears doing that, right? To be walking out the door going to war, what you guys deal with, I mean I cannot imagine. And again, it takes a certain person to be able to do that. And I don’t think I have that strength.” — Chris Hemsworth (Actor)

While the American public was still in shock, these men ventured into the unknown, into a situation fraught with danger, to try and settle the score and bring us a victory. They had to leave their wives and kids at a moment’s notice, with both they and their families not knowing where they were going or if they’d ever make it back.” — Jerry Bruckheimer (Producer)

I was fortunate enough to meet with a group of ten incredible bloggers, many of whom are milspouses, for a roundtable discussion with Chris Hemsworth. He plays Captain Mitch Nelson in “12 Strong,” and prepared for his role by reading the book and consulting with military authorities.

Hemsworth, famous for playing the mythical hero “Thor” was inspired and honored to play a real-life hero. He talked with the actual Green Beret that he depicts in the film and shares, “When he’s retelling his stories about this mission, there is no sort of bravado or sort of ego in the presentation about what he’s achieved. It’s just, ‘It’s my job.’” Hemsworth, impressed by the level of humility and integrity continues, “It’s just this complete, selfless sort of attitude, and sort of that was, I think, the thing we were all trying to embody and grab a hold of and imbue into the characters.”

Hemsworth also recognized the sacrifice that our military families experience and he shared this gratitude:

Thank you, thank you for what you guys do and the commitment…so that we can live our life in peace and enjoy the freedom that many people don’t get. You know, that we are fortunate enough to receive due to all of you guys and all the military. So yes. Thank you.”

Heart of a hero. Courage of a warrior. 12 Strong is in theaters January 19.

Chris Hemsworth (“Thor,” “The Avengers” films) and Oscar nominee Michael Shannon (“Revolutionary Road,” “Nocturnal Animals”) star in “12 Strong,” a powerful new war drama from Alcon Entertainment, Black Label Media, and Jerry Bruckheimer Films. Based on Doug Stanton’s best-selling book, “Horse Soldiers,” it is story of heroism based on true events that unfolded a world away in the aftermath of 9/11.

“12 Strong” is set in the harrowing days following 9/11 when a U.S. Special Forces team, led by their new Captain, Mitch Nelson (Chris Hemsworth), is chosen to be the first U.S. troops sent into Afghanistan for an extremely dangerous mission. There, in the rugged mountains, they must convince Northern Alliance General Dostum (Navid Negahban) to join forces with them to fight their common adversary: the Taliban and their Al Qaeda allies. In addition to overcoming mutual distrust and a vast cultural divide, the Americans—accustomed to state-of-the-art warfare—must adopt the rudimentary tactics of the Afghani horse soldiers. But despite their uneasy bond, the new allies face overwhelming odds: outnumbered and outgunned by a ruthless enemy that does not take prisoners.

Rated R for war violence and language throughout.

A soldier is as strong as his word. 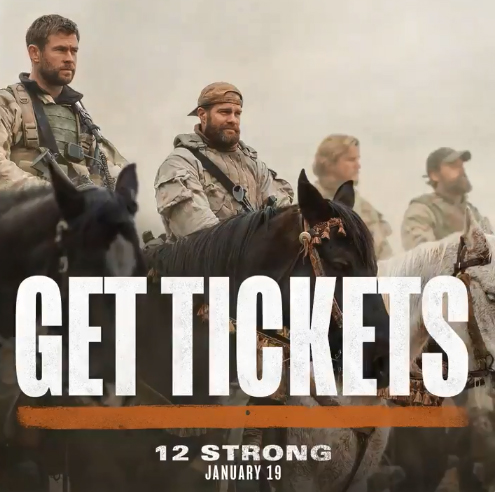 A self-described “Jackie of All Trades,” former Army wife Jackie Toops enjoys exploring the various facets of her personality by chronicling military life, world travels, family, her love of the arts and more. Her academic background is in the fields of Interdisciplinary Humanities, Museum Studies and Nonprofit Management, and she has overseen public relations for museums, galleries and universities. Jackie’s articles have been featured on Army Wife 101, Wall Street International Magazine, SoFluential, HomeAway, Military Biz Connection and FamiliesGo. While stationed in Germany, she regularly discussed her articles on-air with the Armed Forces Network in Wiesbaden. A mother of two, Jackie enjoys coffee, freelance writing, languages and discovering new ways to express herself. Follow her on Facebook and Twitter.
January 18, 2018 by Jackie Toops | 0 comments